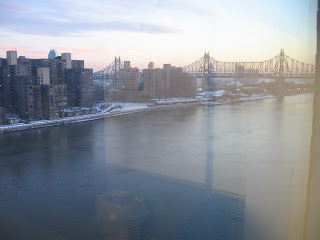 (The following is the first post ever posted on The Lohasian, August 28, 2007)

I am not joiner. I was never a sorority girl, never belonged to a team in high school, was never a girl scout, a cub scout, a brownie or the like. I hate affiliating with a political party, or for that matter a religion (I was lucky to have been born into two). Affiliating for me meant becoming a product of the group, and giving up my self identity, that is until I became a parent.

I remember sitting in my hospital room with my first born in my arms, at the crack of dawn, overlooking the east river from my room at New York Hospital. There she was, all 7 lbs of her, and yet she seemed massive to me. She lay there in my arms, staring up at me with an intimidating wisdom in her eyes, filled with expectation. It was as if she had some check list in her mind of what "good mommy"is suppose to be and I was still adjusting to being a mommy, any kind of mommy for that matter. I knew nothing, and this is what I knew for sure, and I was even more sure that she knew it. I looked out the window, and saw the sun coming up and filling the sky with a pale pink glow. For the world outside that window, it was the beginning of just another day, for me, it was the beginning of everything.

I was alone with my new baby in that silent sterile room and minute by minute I realized that it was not just that I knew nothing of parenting her, but I knew nothing of how to parent her in this world. I was thirty years old and barely figured anything out to be able to contribute to helping form another life. I was unequipped; an imposter. I looked down on the FDR highway below my window, with taxi's speeding by and people rushing towards or away from their life, and there I was suppose to raise another human to live in this world, fulfill some purpose and be happy and content in this big, noisy, dirty, and generally ill at ease world. Where was I to start? I looked down at this 7lb bundle of possibility and said the only thing I could think of "so listen, I'll make you a deal, you stay patient with me and I will do my best, and I will stay patient with you and you will do your best..and that will be our deal." Maybe it was an odd coincidence, but I remember that just at that moment she closed her eyes and fell asleep again. I believed that maybe I finally I did something right, somehow intuitively put her mind at ease. My first major accomplishment in motherhood.

Since that cold February morning six years ago I have had one more child, grown somewhat wiser (or so I like to believe) and in a few short years somehow accidentally became an affiliator with a lifestyle that I later learned actually had a name - LOHAS ( lifestyle of health and sustainability). Somewhere along the way I realized that in order to know how to parent, you have to know what you hold important in this world. Every lesson, every choice, every commitment you make as a parent is grounded in some value system, some perception of what your world is about. Becoming a mother clarified for me the core beliefs that I innately always had. It was as if my daughter removed some vail and I finally saw the world and where I fit in it. I realized that it was not affiliating with and idea or a group that defined you, but that our ideas and affiliations define our world. We put our energy behind ideas, with our thoughts and our presence, and in doing so we breath life into them. In having a child, defining my world became critical, if even in small ways. I needed to in some small way help shape this planet in line with what felt whole to me in my gut - a feeling that often was out of sync with what I saw in the this world.

My ideas emerged, one by one, like trickles of water. I realized that I was clearly focused on a gentler approach to parenting, a more healthful way of life, a more natural and spiritual methodology in how to care for my kids. I realized my own values by simply looking closely at what "felt good" and what "felt bad." The need to rely on my inner voice, my mother's intuition (the only guide book I felt I had), forced me to confront what intuitively I believed to be right, about my world and our how we defined our lifestyle within it. And in one big swoop, I became not only part of something, but part of many things; the natural parenting movement, the environmental movement, the organic and alternative health and wellness movement, and more - without once ever realizing it. And it felt really good, genuine, and whole.

Perhaps identifying or affiliating with groups was not all that bad - perhaps they affiliated with you as much as you affiliated with them. I never had to go out and actually join any club or organization, my ideas were my affiliation-and to them I remain, a most passionate contributing member.