An Education on The Lazy Days of Summer 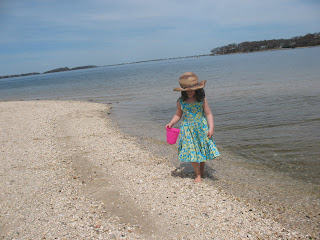 I see my daughters brand new school backpack sitting in the dining room, and I know that summer is officially coming to an end. Pretty soon it will be filled with books, scraps of construction paper from her various art projects and remnants of food, from lunches that were never totally finished.

Two days ago we went to the first birthday party on the Kindergarten social circuit. Moms were scurrying to find out who landed in which class, as if we were exchanging information on what college they were accepted. There was a definite undertone of "which class has all the really smart kids?" This is particularly amusing as my daughter goes to a school for gifted kids, where IQ is measured before the first application is ever accepted. They are all really bright kids, so there is actually very little to assess in terms of who gets placed where, or why. None-the-less everyone was asking everyone else, and trying to pull the pieces together. The mom of the little boy who liked to stand on tables and pick his nose last year landed in my daughters class, which seemed to throw everyone off as she is the best reader of the group. The girl who ate play-do last year landed in the class with the boy who was doing 2nd grade math by the age of four. In the mean time our little wunderkinds ran around with pizza on their faces, and cake on their clothes, chasing one another in a circle, over and over again like little hamsters. They were luckily oblivious to the politicking happening just past the dessert table.

Then the questions drifted to summer vacation. Moms exchanged data on camps attended. My daughter attended no camps - I had little to add to this subject I thought.

"So what did she do all summer?" asked one mom
"Science experiments in my kitchen," I answered
"or baking cakes, and painting flowers on the driveway with her grandma. That kind of thing." I answered.
"That's cute." she said.

Mommy "A" then proceeded to tell me about how busy her family was juggling camp, and the endless schedule of other activities that filled up their time.

"It was exhausting" she concluded with pride.
"I have no idea how I would fill up all that time for my boys, if I had them home all day, all summer long" she added.
"I didn't" I answered
"My daughter did. She had to come up with what to do."
My response was greeted with skepticism. It seemed like it was a hard concept to grasp - a 5 year old, entertaining herself. this seemed to be the stuff of magic.

Three months ago, as preschool was just rapping up, and moms were all in the mad pre-summer rush to register their kids into any number of activities in the area, I made the unpopular decision to sign up my daughter for a whopping six days of dance camp (at the end of summer)- and nothing else. Frankly I did it because I was taking classes at the time at a local community college, and my schedule would not allow me to drive her around all morning. But second, something inside me just kept saying, she should have one summer where she can laze around and discover activities all on her own. Heck, maybe even play with her little brother. My mother in law, who was visiting from Austria, thought it was a perfectly normal decision, "she doesn't need all this activity" she would repeat to me when I had moments of worry that my five year old would be lonely, miserable and bored as her peers were spending joyous summers in their five thousand dollar camps. The amazing thing is that my daughter did not want to go to camp,"mom, I just don't want to rush in the morning." So she didn't, and I didn't, and we spent a lazy summer inventing moments as they came.

"I think my daughter actually had the most educational summer ever frankly." I blurted out to the mom. All of a sudden I had her full attention.
"Really, how so?" she asked
"She learned how to create her own joy. And I never had to teach her a thing. She made books out of cardboard and scraps of paper, and made soups from flowers, leaves and rainwater in the garden. She also baked cakes, almost entirely on her own. She slept late every day too. She also saw a chipmunk die on a neighbors lawn - but that brought on a lot of discussion on death and even reincarnation. It was all sort of mind expanding."
"Wasn't she bored though? I mean they do so much here all day, during the school year." she continued.
"Well, she also read a alot, and we painted together, she even learned to hang upside down on the monkey bars in the yard - she wanted to learn to do that since last summer. It was a big accomplishment for us. Not much boredom, as far I can recall"

I knew this conversation would run in a circle. Somehow it felt like what we did at home was less fascinating than dodge ball, swimming or tag at camp. What I really wanted to say is that my daughter learned how to be alone, and be happy. She learned how to create her fun. She learned how to enjoy the quiet in her room, her yard, and her head. She fostered her imagination and I didn't have to pay a cent for it (although if someone were to try sell it to me in a camp program at the beginning of summer - I might have bought it). By the time the dance camp rolled around in mid August, my little one didn't even really want to go. I began to ask myself, when did parenting become become a curatorial position? Why is it that so much time is spent deciding how to fill up our kids time outside our home and away from our families? Why do five year olds have a busier schedule than their parents? When did families start this type of outsourcing?

September is almost here and school is around the corner. Next week my daughter gets on her first school bus. It will whisk here away, like a magic carpet, and she will be gone the whole day. I miss her already. I will miss waking up in bed together and rolling around for twenty minutes listening to her tell me how she was carried into our bed in the middle of the night by a fairy and she didn't sneak in there again. Or tell me about her dreams or her big plans for the day, including making a a monkey mask, making chocolate chip pancakes or playing with the sprinklers in the yard. I will miss the slowness of time that summer mornings offer - when there is no rush, no where really to go.

We want to hold on to our children's childhood so badly, yet we keep them so busy and occupied outside our homes that we barely get to experience those childhoods. I wonder when this became part of modern parenting, and why? I mean, what do we actually gain from keeping our kids so busy, so engaged at every moment? What are we ultimately preparing them for, if their life is designed for them moment to moment; filled to the rim. I promised myself that ours would be a quieter life. I will risk boredom with my kids, if they can take ownership of making their happiness. I will risk the occasionally whining if they can make a good times, out of their free time. They need to figure out that happiness is not always "somewhere out there." But most of all, I will steal as many moments as possible to spend together, for as long as they let me. I will slow the aggressive hand of time, by leaving it empty of hurry, so I can make every minute count.

"Well, I think she had a great summer, actually we all did - I am sad the school year is starting. I miss her already" I finished, as my daughter ran over to me, hugged me, and left yet another pizza face stain on my pants.
"oops sorry mom" she said, and grinned ear to ear.