You Are What You Eat - Organic Food Statistics Worth Chewing On 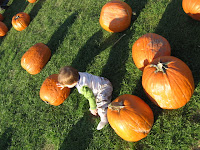 On my way home today I stopped off at a local farmers market today to replenish our fruits supplies. While there I came across some very illuminating literature published by NOFA (Northeast Organic Farming Association) with some interesting statistics that I thought I would share.

-An estimated 1.2 billion pounds of pesticides are used in the U.S every year. More than 16,000 pesticide products are made from roughly 1,200 registered active ingredients.

-Antibiotics in livestock production is contributing to reduced efficacy of important antibiotics used to treat people, due to the growing antibiotic resistance of disease organisms. The American Medical Association has gone on record seeking a ban on use of antibiotics for nontherapeutic use in farm animals for this reason.

-The Center for Disease Control show that children are exposed to the highest level of organophosphate family of pesticides, which damage the nervous system. Women had the highest measured body burden levels of three to six organochlorine pesticides evaluated, particularly problematic because they are known to have multiple harmful effects when crossing the placenta during fetal development.


In addition I dug up the following stats when exploring the nutritional value in organic -vs- non-organic foods (a long standing debate).

Apparently USDA official were unable to explain the decline in nutrients, but said that "many factors could be involved." One obvious possibility is how the soil is being deprived year to year. It is being soaked by chemicals and used solely to hold plants in place. This approach quickly uses up all the nutrients. Unless you replace them using sustainable methods, where are those nutrients going to come from?

Organic Gardening Magazine has been pressuring the USDA to study the nutrient levels in produce, to assess weather chemical farming is the cause of the decline. As more sources profile this concern and more activists take on this issue, the USDA might be forced to look at the reasons behind the weakened nutrition in vegetable crops.

Next time you are shopping and considering buying non-organic ask yourself about the choices you are making. That simple $2.50 purchase of corn or hamburger meat. might not only be utterly useless from a nutritional standpoint, but can also be harmful. Keep it mindful - how you shop not only impacts your economy, but your health, and your environment.

For More Information - go to the Northeast Organic Farming Association