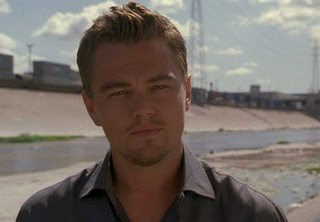 --film + television + print--
I just returned from seeing "The 11th Hour,” the environmental documentary directed by Leila Peterson and NadiaConners and narrated by Leonardo DiCaprio, and am stunned by the reviews I have read of the film. So many critics had slammed the picture. Had I listened to any one of those “experts” I might have missed a very illuminating look into the “big picture” of how (as the film poster depicts) our footprint is impacting the very course of our planet.

What bothers me most, is that the reviews simply do not understand that the purpose of the film is not to simply “entertain you” or even function as a piece of cinematic art, but rather as an informative tool for the masses. It was not meant to be a documentary posing a deep philosophical debate nor an in depth analysis of any single issue – its purpose was to introduce a breadth of elements that are contributing to the dynamic of environmental destruction. What amazes me is how the response to the film is in line with one of the issues the film raises, that the catastrophic problem is at its core – in our thinking. I am pained that summer films that turn human excrement or masturbation into stuff of comedy are justified, as juvenile humor – they have” their place.” But the “11th Hour is destroyed in the press because it has “too many talking heads.” Below are my two favorite excerpts of reviews of the documentary, that I found utterly hair raising;

“It'll be interesting to see how many people spend an hour and a half in the theater this Labor Day weekend watching Leonardo DiCaprio's documentary about how we are teetering on the edge of global warming catastrophe. It sounds like a bummer way to end the summer. But if moviegoers turn to the Chicago Tribune's Michael Phillips' review of the film for guidance, then the movie may well be tossed into the rubbish heap along with the year's other flops.”

And even more pathetic…

“If you're expecting to see Leo riding a giant tortoise or touring a wind farm or anything like that, then you'll be very disappointed.”

This nation is so addicted to being entertained, that it seems to suffer from a cultural scale of ADD. It seems from the reviews I read, no one should want to sit through 90 mts of critically important information without it being perfectly crafted into some form of easily digestible fun. The "11th Hour" was engaging and interesting and had moments where it left me laughing, brought me to the brink of tears and lost me in deep thought. This works for me. What the response to the film reminds me of, is the response I once heard of a museum goer looking at a Mark Rothko at the MOMA– “But its so simple, what like two colors, one on top of the other…that’s it? Really boring, don’t you think. I mean would you really want that in your house?” In short, its about the personal experience of it - the effectiveness of the message, less so than the individual components of it.

I believe that we must support any picture that makes an earnest attempt to inspire new thinking, especially if that thinking is on the subject of our survival on this planet. I applaud DiCaprio for getting behind a project of this sort, and pulling together a documentary that attempts to be ambitious in topics it covers, while simple in how it delivers the information. Bravo Leo!

For more information on the film, and what you can do to support in the cause of saving the planet go to http://www.11thhouraction.com