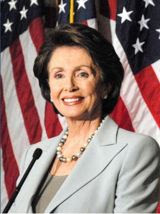 In advance of a global warming conference this week, Speaker Nancy Pelosi and Senate Majority Leader Harry Reid released the following letter to President Bush today, calling on him to announce his support for mandatory national and international limits on the pollution that causes global warming.

"Our legacy to the many generations that will follow us will depend upon how we handle the climate crisis and whether as a nation and as a world community we can take real action in time to avoid the worst effects of global warming," Pelosi and Reid wrote.

On Thursday and Friday, representatives of the world's largest greenhouse gas emitting nations will meet in Washington at your invitation to discuss their roles in combating global warming. We call upon you to use this occasion to announce your support for mandatory national and international limits on the pollution that causes global warming.

The overwhelming body of scientific evidence, including the authoritative work of the Intergovernmental Panel on Climate Change, clearly demonstrates that human industrial activity is the major cause of the global warming now occurring. Climate change is already having profound effects on human and biological systems; to avoid catastrophic climate impacts, we must start cutting global warming pollution immediately. A further increase of approximately two degrees Fahrenheit above today's global average temperature will risk triggering the eventual loss of major ice sheets and sea level rise affecting hundreds of millions of people.

To stay below this two-degree threshold, we need to reduce worldwide emissions by at least 50 percent by the middle of this century. The U.S. and the world's other developed countries, which are responsible for most of the carbon dioxide now in the atmosphere and have the greatest technological capability, will need to achieve reductions on the order of 60 to 80 percent.

The world is coming to a crossroads. Most of the countries represented at the Major Emitters Meeting - as well as most countries that will not be present - are working under the United Nations Framework Convention on Climate Change and the Kyoto Protocol to reach agreement on legally-binding emission limits for industrialized countries and on measures to achieve greater emission reductions from emerging economies under a robust, expanded carbon market. Such a system can provide us with a fair chance of staving off catastrophic warming, while supporting sustainable development and adaptation for all countries.

Your Administration has been pursuing an alternative approach based on purely aspirational targets and non-binding pledges of national action, as was evident at the recent summit of Asia Pacific Economic Cooperation (APEC) countries. This voluntary approach, Mr. President, cannot succeed in staving off catastrophic climate change impacts. If we are to preserve our world as it exists today, we must take effective action now, both here at home and in cooperation with other nations. We ask for your support of the mandatory measures included in the energy bills passed by the Senate and the House of Representatives which, when enacted, will be a down-payment on preventing global warming. An effective domestic program, however, requires mandatory, market-based global warming legislation covering the full spectrum of U.S. emissions, and we ask you to join us in enacting such legislation in this Congress.

Likewise, an effective international regime must be based on mandatory limits for developed nations and creation of a global carbon market that enables enhanced participation by large developing nations. As your Administration acknowledges, we have had 20 years of success under the Montreal Protocol, the highly acclaimed treaty to protect the ozone layer. The history of the ozone treaty demonstrates that we can successfully construct a binding global regime under which developed countries take the lead and developing countries follow. The ozone treaty averted a genuine global catastrophe. Now we must do the same to stop global warming. We urge you to embrace this effective model in lieu of voluntary approaches that will not work.

Finally, we ask for your commitment that the Washington meeting will not start a separate process competing with negotiations under the United Nations Framework Convention on Climate Change, to which the U.S. is a party, and which is the world's recognized forum for hammering out the international response to global warming. It is particularly important to recognize that the most vulnerable nations, which will be hit hardest by global warming, are not represented at the major emitters meeting.

Our legacy to the many generations that will follow us will depend upon how we handle the climate crisis and whether as a nation and as a world community we can take real action in time to avoid the worst effects of global warming. We look forward to your response.