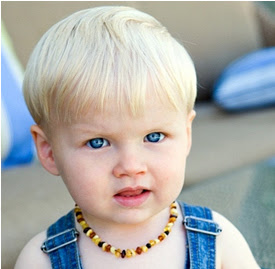 Few things are more frustrating for parents than the sound of screaming, teething babies. In America the solution has typically been chemical ridden teething gels or cold teething toys, both offering limited success. But for parents overseas, and a small handful of natural "in the know moms" in the U.S., no better solution exists than amber teething necklaces.

These little necklaces are meant to be worn and not chewed on. By simply wearing them, teething toddlers experience almost instant relief from all signs of pain. Although no conclusive knowledge exists on why amber necklaces work, thousands of moms worldwide swear by them (including the one writing this). There are two theories that exist as to why these miracle neckalces work.

The first theory states that amber has healing oils, and that the warmth of the skin releases these oils into the skin which is then absorbed into the blood stream. A second theory is based on hard scientific findings that point to amber being electro-magnetically charged with significant amounts electronegative energy. According to this theory, wearing electro-negatively charged amber produces negative ionisation on the skin's surface which assist in the prevention of disease. Regardless of the reason, simply put - they work.

In some parts of the world, such as Austria and Switzerland, amber necklaces are recognized for their curative effects by the Allopathic medical community, and sold readily in drug stores. For us in the U.S., these life savers for parents and toddlers alike, are available at online source in toddler size (important so as to avoid chocking hazards), such as Wonderous Gems or Amberizon.

Post originally submitted by Julia Z.Fenster of The Lohasian, to The Alternative Consumer