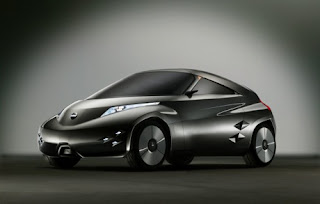 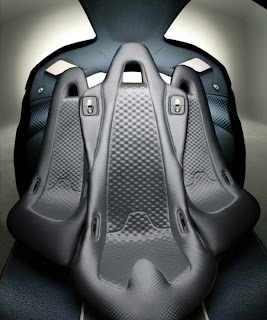 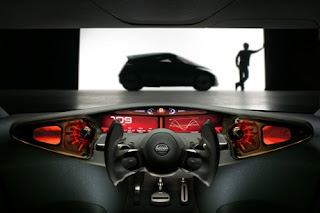 --science + technology + innovation--
Recently, at the Frankfurt Car Show, Nissan turned heads with the reveal of a concept car straight out of sci fi film, or more appropriately a modern day video game. If it looks like a video game car, its probably because its meant to.

According to Nissan research, teenagers have fallen out of love with the car. They would rather drive their virtual cars, in the virtual world of their video game than drive cross town to see friends. Nissan wants to prove this finicky demographic wrong with the all electric Mixim concept car.

Looking at the car it is hard to overlook that it is aimed straight at the video gamer lot, from it's game controller inspired steering wheel to its cockpit style interior. Looking at the interior, one is not sure weather you will take off, or lift off,in the car (reminding one of the interiors of the flying machines from Minority Report). According to Shiro Nakamura, Sr. VP at Nissan: “It combines a sociable three plus one interior with controls and visual projections that are familiar to the computer generation. And it uses environmentally-friendly battery power.”

The car that is described as a baby hatchback weighs just 2100 pounds and clocks in at a tiny 145 inches end-to-end. The inside surprises with its three seater interior, add to that a lithium-ion battery pack and two Nissan "Super Motors" that provide the Mixim with all-wheel-drive and you have a pretty interesting sell for a car that will probably never make it to the real world freeway.

Mixim is a visual delight, that inspires earth friendly sleek visions of a future to come.