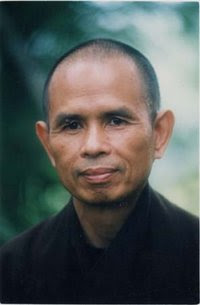 Thich Nhat Hanh, the world renowned Zen Buddhist monk, author and nobel peace prize nominated activist will be touring the US throughout the month of September, appearing at the General Mindfulness Retreat at the Deer Park Monastery on September 19-23rd and at the Morning Peace Walk in McCarthur Park (Los Angeles, CA) on September 29, 2007.

Thich Nhat Hanh had joined a Zen monastery at the age of 16 and seven years later became ordained as a monk. His life has been marked by extraordinary stands for peace and transformation, from the founding of the School of Youth for Social Services in Saigon (to help build school, rebuild homes and settle families after the Vietnam War) to working directly with Martin Luther King Jr to publicly oppose the Vietnam War. King went on to nominate Thich Nhat Hanh for the Nobel Peace Prize in 1967.

Hanh had later established the Order of Interbeing in 1967 and had devoted many years to founding monastic and practice centers around the world. The visionary has published over 100 books in 40 languages and has devoted the entirety of his life to spreading peace worldwide.

Below you will find the 14 Precepts of this Thict Nhat Hanh, that will speak to the humanity in all of us.

The 14 Precepts of Tiep Hien Buddhism
by Thich Nhat Hanh


1. Do not be idolatrous about or bound to any doctrine, theory, or ideology, even Buddhist ones. All systems of thought are guiding means; they are not absolute truth. If you have a gun, you can shoot one, two, three, five people; but if you have an ideology and stick to it, thinking it is the absolute truth, you can kill millions.

2. Do not think that the knowledge you presently possess is changeless, absolute truth. Avoid being narrow-minded and bound to present views. Learn and practice non-attachment from views in order to be open to receive others’ viewpoints. Truth is found in life and not merely in conceptual knowledge. Be ready to learn throughout your entire life and to observe reality in yourself and in the world at all times.

3. Do not force others, including children, by any means whatsoever, to adopt your views, whether by authority, threat, money, propaganda, or even education. However, through compassionate dialogue, help others renounce fanaticism and narrowness.

5. Do not accumulate wealth while millions are hungry. Do not take as the aim of your life fame, profit, wealth or sensual pleasure. Live simply and share time, energy and material resources with those who are in need. In the context of our modern society, simple living also means to remain as free as possible from the destructive social and economic machine, and to avoid stress, depression, high blood pressure and other modern diseases.

6. Do not maintain anger or hatred. As soon as anger and hatred arise, practice meditation on compassion in order to deeply understand the persons who have caused anger and hatred. Learn to look at other beings with the eyes of compassion.

7. Do not lose yourself in dispersion and in your surroundings. Learn to practice breathing in order to regain composure of body and mind, to practice mindfulness, and to develop concentration and understanding. Live in awareness.

8. Do not utter words that can create discord and cause the community to break. Make every effort to reconcile and resolve all conflicts, however small.

9. Do not say untruthful things for the sake of personal interest or to impress people. Do not utter words that cause division or hatred. Do not spread news that you do not know to be certain. Do not criticize or condemn things that you are not sure of. Always speak truthfully and constructively. Have the courage to speak out about situations of injustice, even when doing so may threaten your own safety.

10. Do not use your religious community for personal gain or profit, or transform your community into a political party. A religious community should, however, take a clear stand against oppression and injustice, and should strive to change the situation without engaging in partisan conflicts.

11. Do not live with a vocation that is harmful to humans and nature. Do not invest in companies that deprive others of their chance to life. Select a vocation which helps realize your ideal of compassion.

12. Do not kill. Do not let others kill. Find whatever means possible to protect life and to prevent war.

13. Possess nothing that should belong to others. Respect the property of others but prevent others from enriching themselves from human suffering or the suffering of other beings.

14. Do not mistreat your body. Learn to handle it with respect. Do not look on your body as only an instrument. Preserve vital energies (sexual, breath, spirit) for the realization of the Way. Sexual expression should not happen without love and commitment. In sexual relationships be aware of future suffering that may be caused. To preserve the happiness of others, respect the rights and commitments of others. Be fully aware of the responsibility of bringing new lives into the world. Meditate on the world into which you are bringing new beings.