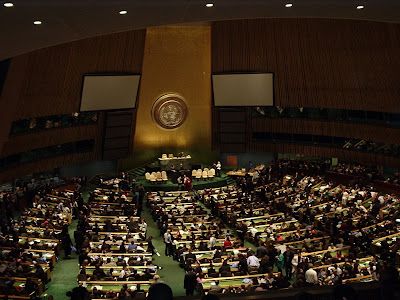 The event was largest ever gathering of world leaders on climate change. The hope of the event was to create a platform for heads of state to present individual ideas on how to mitigate and finance potential solutions for the crises. The meeting also hoped to create a global consensus.

Unfortunately, the event was not attended by President Bush who instead held bi-lateral meetings at the The Waldorf Astoria Hotel in New York with President Mahmoud Abbas of the Palestinian Authority and with Brazilian President Luiz Inacio Lula da Silva. But President Bush did voice appreciation for "the discussions on climate change led by the secretary-general" last night, when the two attended a dinner that capped a day of events devoted to galvanizing the international community on the issue.

While President Bush was not at the conference to voice America's position, the strongest U.S. voice at the event was former Vice President Al Gore who called for "a new Marshall Plan" that will "simultaneously tackle global warming and poverty."

"We must link poverty reduction with the sharp reduction of carbon dioxide emissions," Gore said, calling for a plan of attack like that of the Marshall Plan, the post-World War II European reconstruction initiative of the United States.

"We now face a global crisis that makes it abundantly clear that increased carbon dioxide emissions anywhere are a threat to the integrity of this planet's climate everywhere," Gore told a luncheon event called "Global Voices on Climate Change. Gore additionally advised the heads of state convene meetings every three months until a post-Kyoto treaty is agreed upon.

The event was further highlighted by a solidarity with the most vulnerable nations, including small island developing states and the least developed countries which are often hardest hit by climate change (as was evidenced by the recent history making floods of Uganda).

"This has been a ground-breaking, historical event," the UN Chief told reporters, characterizing the summit as a "sea of change in the repsonse to climate change."

Later this week leaders will additionally gather for the White House Climate Change Conference. The event will be the first of a series of climate meetings with the leaders of "major economies". Fifteen national governments plus the European Union and the United Nations are scheduled to attend. Bush said the conference will place "special emphasis" on technology. The first event is set for September 27+28, 2007, in Washington D.C.