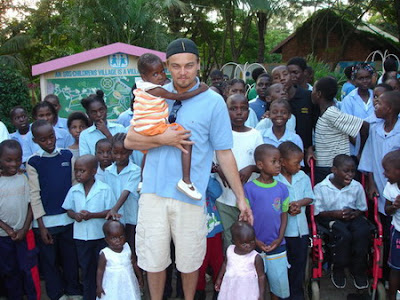 Photo is of the 24 children of the SOS Childrens Village in Maputo, Mozambique during a special visit by Leonardo Di Caprio, during his stay in the are while filming "Blood Diamond" in 2006.


Swarovski, the world leader in precision-cut crystal, has partnered with a group of creative celebrities to raise funds for SOS Children's Villages, the world's largest charity for orphaned and abandoned children.

"I am happy and proud to be working with Swarovski to help raise awareness and money for SOS Children's Villages. SOS is providing orphans around the world with what they need most -- a family. Their work is extraordinary," says Katharine McPhee of American Idol fame.

World Orphan Week (October 1-October 7,2007) began in 2005 to create awareness of the global needs of orphaned and abandoned children around the world (estimated to reach 25 million worldwide by 2010), and to activate volunteers to raise funds for vital programs that can support these children.


"SOS Children's Villages is thrilled to be partnering with Swarovski for World Orphan Week. Swarovski understands the needs of orphaned children around the world, and with their sponsored charity auction of one-of-a-kind celebrity designed jackets, they have joined us in an important way to make a difference to children who have lost everything," says Dr. Heather Paul, CEO of SOS-USA.

The partnership between SOS and Swarovski dates back to the founding of SOS in the Tyrol region of Austria (also home of Swarovski's world manufacturing headquarters) in 1949. The company's founder, Daniel Swarovski I, was a humanitarian who personally supported the charity and the crystal maker is happy to have continued the relationship through
today.