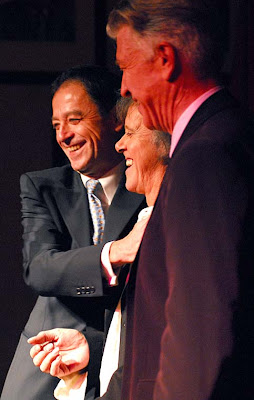 Sixties sensation Donovan is in active planning on launching a Scotland based University, unlike any other - one exclusively focused on the study of Transcendental Meditation (TM). Donovan, alongside pal and TM practicing devotee Director David Lynch (Eraserhead,Twin Peaks, Mulholland Drive etc.) is speaking to Scotland officials to establish the University as an official and accredited place of learning.

Maharishi Mahesh Yogi told the "Mellow Yellow" pop star to build the university on a visit back in 1968. But it was not until a recent meeting with famed eccentric film director David Lynch (a well known evangelist of TM) that he decided to fulfill the Maharishi's request.

"I know it sounds like an airy-fairy hippie dream to go on about '60s peace and love," Donovan told the Associated Press "But the world is ready for this now."

Lynch founded, The David Lynch Foundation, an organization whose mission is to bring transcendental meditation to schools in deprived areas of the US. Lynch and his foundations supporters report on positive effects on students at the schools where it has already been introduced.