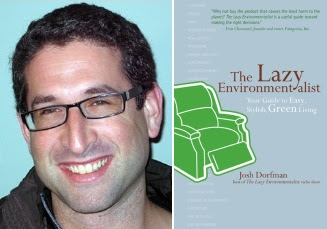 We just caught up with Josh Dorfman writer of "The Lazy Environmentalist" and host of the radio show by the same name (catch it on on Sirius), in the Green Tent of The 15th Annual International Hamptons Film Festival to discuss his take on the state of living green.

Dorfman, who just completed a presentation, was surrounded by a crowd of festival attendees signing copies of his book, when we whisked him away to a corner filled with powder blue coaches surrounded by handbags and displays of Prada shoes (yes, Green clearly is a bit more high end, on the east end).

A month ago the festival contacted Josh to participate in the "Green Initiative" sponsored by Greener Days. Josh said he was happy to participate and excited about the opportunity to get involved in a film based event, as the industry tells the stories that "need to be told"...green being one of them.

"The media does not get how to tell the stories in a positive way, without all the doom and gloom. That's what's missing" he said.

According to Dorfman neither the mass media nor the blogosphere (with the exception of his two favorites in the space, Eco Geek and Inhabitat) is doing a particularly good job of telling the story. But although the mass media seems to be behind the eight ball, the "hippification of green" driven by celebrities is effective in his view.

"The planet couldn't care less about why people are making positive environmental decisions, as long as they are. Celebrities can put their name behind a cause and create change. This is a good thing, this is what matters."

But how exactly do we get the masses to realign the every day things, those fundamental changes that effect our footprint on the planet? Beyond wanting to be part of the green trend - how do we create a sustainable shift in our very approach to how we live?

"Everybody knows the environment is a mess, especially once you take away the global warming angle, few have anything to argue." Dorfman stated.

"What we need is a two prong plan to effect real change. We need to paint a vision that will inspire people to create change, to show them how living green makes their life better. The second part is making green accessible by making it economical - make it cheap - have it make sense to the public's bottom line."

We began to wonder, how does Dorfman see the world in five years, does green stay hip, does it get cheap, does it make finally reach mass proportion or remain on cutting edge fringe ? Where is " living green and doing green business” in five years?

"I don't think we have reached the pinnacle of the movement yet. It seems that in 2003-2004 something happened in the creative community (the "professional creative class") where simultaneously different creative groups began making product that works for them and started to 'influence up',' the CEO's of companies, and inadvertently influencing down - to the consumers." According to Dorfman the green world might see what the Internet world saw after web 1.0 - essentially a massive correction.

"Real business will survive while others won’t." said Dorfman. The five year snap shot seems to promise the discovery of where the real green is - in living green.

But outside all the talk about business, marketing, and the media we wondered about the question of what ultimately is the driving force in the shifting culture-perhaps something more meaningful, dare we say even more "spiritual."

Dorfman admits that being green needs to be simple, and cheap, and make sense to ones own individual life - it is also about an overall shift in consciousness.

"It is an overall consciousness, the more choices you make about living a certain way, the more it impacts the rest of your life - who you are. Its unavoidable."

According to Dorfman, and we agree, becoming green might be a very positive and very steep slippery slope.

To learn more about Josh Dorfman, or his book or radio show (both titled The Lazy Environmentalist), go to www.lazyenvironmentalist.com