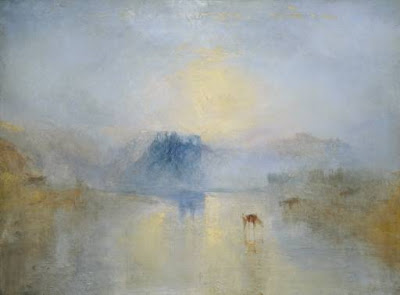 The English landscape painter JMW Turner probably never imagined that his art would be the subject of scientific inquiry, but in fact today the awe inspiring landscapes that defined his career, are at the center of a fascinating new study.

Scientists are analysing the brilliant sunsets painted by Turner (and other artists) to work out the "cooling effects" of large volcanic eruptions. By getting a clearer picture of climate variation in the past they hope to improve the computer models necessary for simulating global warming. The project is spearhead by a group at the National Observatory of Athens.

The group is using the works of old masters to estimate the natural pollution remains in the skies caused by the eruptions of volcano's such as Mount Krakatoa in 1883. Reports described brilliant sunsets for up to several years after the eruptions caused by the retreating light which was scattered due to the reflective particles thrown into the atmosphere. By analyzing colors of sunsets painted before and after eruptions, researchers believe they can calculate the amount of material in the sky at the time.

Christos Zerefos, who led the research, said: "We're taking advantage of the attitudes of famous painters to portray real scenes they were looking at. This is the first attempt to analyse this old art in a scientific way, and tells the story of how our climate has varied naturally in the past."

The results of this unique study will feed into the scientific study of a phenomenon called "global dimming," which is caused by air pollution blocking sunlight. Some experts believe this has acted as a brake on global warming.

Oh lord, one can only imagine what scientists will make out in a few centuries from some of the work of say Andre Serrano, Jeff Koons, or Damien Hirst...to list a few. No doubt we will behind quite an impression.