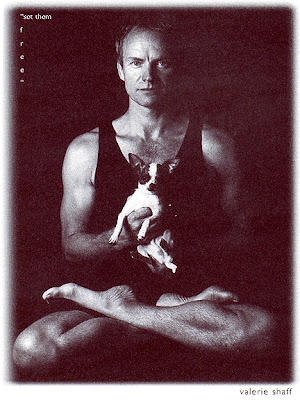 World renowned musician, Sting, made a name for himself as lead vocalist of the Police and then went on to a wildly successful solo career. Today Sting continues his creative journey supported by the power of his humanitarian work and his mind+body+ spirit enriching yoga practice which is a major theme of his life.

"I was 38 or 39 before I became a disciple of this very spiritual art. My one regret is that I didn't begin earlier. I think I would have been further along the path, had I started earlier." Sting states. "But then again, perhaps I wasn't ready. I had been through various fitness regimes before. I ran about five miles a day and I did aerobics for awhile. I always try to stay fit because as a performer fitness is essential. Still, it wasn't until I met Danny Paradise, who became my mentor in Yoga, that I took the discipline seriously."

While in post production on his Soul Cages album in Egypt, Sting met Paradise. The two were introduced by Sting's guitarist, Dominic Miller. Dominic suggested that Sting learn Yoga from Danny.

Sting recalls, "I knew nothing about Yoga at the time. I thought its practitioners just sat on the floor cross-legged and contemplated their navels. It never really struck me as something in which I would be interested. I was into more aggressive workouts. But Dominic assured me, it would be most difficult and physically demanding. The next day Danny and I had a trial workout, and within 20 minutes, he had put a big dent in my pride and my self esteem. As fit as I thought I was, I just couldn't do the things he was doing. It was like he was from another planet in terms of balance, strength and grace. So I said, 'That's for me.' The day after that Trudie and I took our first official lessons; and from then on I was stuck."

Sting reveals that yoga also allows him greater composure to confront the more stressful events of his day. He says, "My mind develops calmness and clarity and I get a lot more done." He stresses that there are more benefits to yoga than he would have thought had he not gotten into it. It really is not just physical," he says, "The deeper I get into Yoga I realize, it is indeed a spiritual practice." He adds that as he gets older and more contemplative, Yoga helps his breathing as well as his mind and is very closely linked to meditation.
Since his introduction to yoga, Sting has become an avid practitioner mastering various complex asanas of Ashtanga Yoga under the tutelage of Vidwan K. Pattabhi Jois, a renowned guru. Jois has a large following with students from across the globe flocking his 60-year-old institute. Jois sings Stings praises on his commitment to Yoga "Sting is one of my best students and also a close friend,'' he states.

Sting joined Jois as David Willam along with his wife Trudie Styler. “They came to me while I was in London and expressed their desire to learn yoga. I'm proud that over the past four years both of them have become serious students of Ashtanaga Yoga, Mysore's traditional form of yoga,'' he says. The couple has shown great commitment and made much headway having completed the Chikatsa Vibhaga (the primary level) and the Nadi Shodana( the intermediate level). “With further practice they will soon be able to master the advanced level as well,'' says their guru.

When not practicing yoga or working on his music, Sting dedicates his time to a number of causes, some of which he has been supporting for several decade including the Rain forest Foundation for which he works tirelessly on with Trudie. He has helped sponsor scores of benefit concerts to raise awareness of the plight of the rain forests, and the natives who call it home and has raised millions of dollars to battle for its preservation.

In addition, the musician has also helped raise millions towards Amnesty International. He says of Amnesty International, "I like its approach to achieving desperately needed world change. "It is the most civilized organization in history. I like its focus. It is non-violent, and it is effective. Its currency is the written word, and its weapon is the letter. Its focus on individuals and the concentration and tenacity with which they defend those imprisoned for their ideas has earned it the cautious respect of repressive governments throughout the world."

He is also very involved in other humanitarian organizations including Band Aid and Live Aid, and organizations promoting cross-cultural tolerance and understanding among diverse people.

Sting best summed up his outlook on life and his values in a 2004 CNN interview:

"Relationships tend to be a microcosm of what's happening in the world. The way we deal with each other is reflected largely in the bigger macro-picture of the world. In that sense, we need more love, we need more understanding, we need more compassion. You multiply that by a couple of billion times and you have a world situation that desperately needs to be changed, that desperately needs more affection more kindness, more charity. So, that may sound a little naive, but I actually believe it."