Recycling for Survival:
Sustainability in the Rest of the World 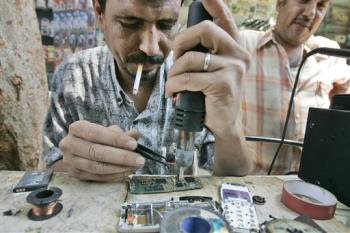 
Before the term recycling existed - "hand me down's" or "making do with what you have" was the term of use. I remember listening to my grandmother, hailing from Siberia, talking about making dolls from old pillowcases and using cans to construct music makers. Nothing was truly ever thrown out. Kids always wore hand me downs, and in my grandma's case, as the youngest of ten kids, she felt she had the biggest wardrobe and actually was most lucky. Water was never thrown out - instead reused, kid after kid, bath after bath. Perhaps not hygienic by modern day standards, but with water to boil for every bath (as hot water was a luxury), it was simply the only reasonable solution. Furniture was never thrown out, instead inherited generation after generation. And scraps of left over food such as fish, meats, veggies all went used - created into ethnic recipes of stews and soups that are now common place.
We think our generation created the idea of recycling, when in reality maybe we just remembered it. The last fifty years have seen such a mass production of every known item, and the increase of wealth in the west has caused such wide spread consumerism, that the need to be thrifty and smart and resource focused had all but disappeared. We lost the need to think about resources, because we had so many. We were numbed down, to actually how things always worked. Today, if you look at less wealthy places in the world (meaning most of the planet), recycling and being resourceful is simply a way of life.

The Associated Press recently ran a story on Egypt's "repair culture," that fixes old electronics instead of disposing and buying a new. They mentioned a street in downtown Cairo (El-Attar) which is the most well known repair area in this city of nearly 20 million people. The two-block street is crammed with workers fixing almost everything — from blenders to boom boxes, cell phones, video game players, and even antique phones and radios. Such repair vendors and shops are actually not unique to Cairo — they are commonplace throughout Africa, Asia and anywhere where people cannot afford to buy new electronics devices every time something breaks down. But the reality is, that none of them are repairing the old instead of buying the new, because of an environmental concern, their business is all about survival=making a living. Recycling is simply a new term for an old behavior, one driven by the need to sustain the individual, rather than the planet.

Perhaps what we need to remember is a very obvious fact of how very rich we are. If you are reading this, you have a computer, a light, a desk and a house with electricity. You have free time, or a white collar job that allows for you to sit and read things that further your mind; an extremely decadent pursuit by global standards. As we all struggle to find small ways to make a difference, let's just remember that for many - the idea of figuring out what to do with all that left over food, all those old clothes that fill up you closet, all those plastic containers once filled with food is a very blessed problem. We need to be real that recycling all our excess in the west - is really a rich mans problem - which unfortunately has also become the poor man's burden.

Perhaps our reasons to reuse, recycle, re purpose are more cerebral and philosophical and filled with concern for the state of the future, than those who do those same things to survive in the present. But regardless, one thing we share in common, is we all need to figure out how be mindful with what we have, or don't have, for some it is an option - for others it 's just a the way of life.


(image above, courtesy of Associated Press)