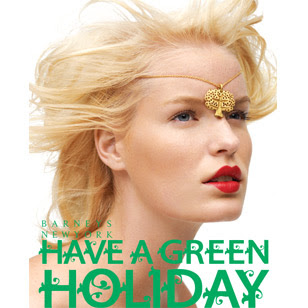 The "go to" shop spot for the celebrity and the swanky set has launched a nationwide environmentally friendly "green" campaign that includes themed store windows, shopping bags, and a catalog with featured environmentally friendly products. Granted the move is more focused on being "up on the trend" then being on the "sustainable bend," Barney's is offering some interesting pieces for the mindful set...granted, those with very deep pockets. Simon Doonan, the Creative Director behind Barneys had lots to say when faced with the criticism and skepticism about the integrity and authenticity of the campaign.

"I think people would be taken aback to have a dept store or fashion store get preachy and scientific with them. You know what I mean? That's not our role. Our role is distraction, self-indulgence, and so if we're going green it has to be done in context and in an appropriate way, and for me that's with a light touch and a bit of humor."

For many buyers it would require good doses of "humor" alright, with sustainable products side by side in a catalogue with Ostrich skin handbags.

"We're a luxury retailer," a Barneys New York spokesman says. "So we're not a green company, but our buyers have put a lot of effort in really scouring the universe for really great green products."

We'll see how consumers and industry responds to the creative campaign. In the meantime, head over to Madison Avenue to check out one of their "mindfully centered" windows, depicting Santa's Fair Trade Sweatshop and the Barneys green version of The 12 Days of Christmas, including six compost toilets.