Benefits and Challenges of Greening Our Schools 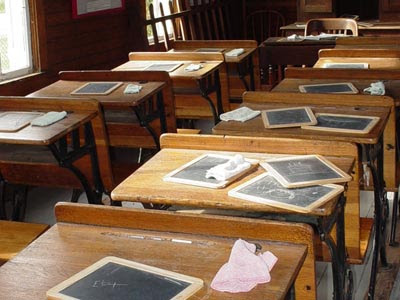 --trends + business + politics--
Twenty seven percent of the US construction market is comprised of building schools. Although, us older folks may have fond memories of that great new school smell (paint, chlorine etc), hopefully the new generation of lucky kids growing up green, probably won't. Building a school that meets LEED standards costs 2 percent (or $3 per square foot) more upfront. While the initial expense of greening a school can be a detractor, the long term upside might change some minds.

Green schools use up to 30 percent less energy, 30 to 50 percent less water, and reduce carbon dioxide emissions by 40 percent compared to traditionally built schools. But beyond the obvious environmental benefits, health benefits and learning boosts might help educators get more Eco-saavy. Here are a few stats to chew on:

I just wonder if greening a school will fall before or after things like getting metal detectors, getting textbooks into struggling schools, paying teachers a decent wage, or removing asbestos from old building. With modern day schools priorities torn in a million different directions, getting "green" might be a smart decision - but one unfortunately landing on a long laundry list of other social challenges.