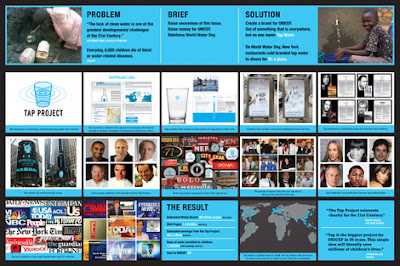 According to the United Nations, there are 1.2 Billion human beings on this planet who do not have access to a safe water supply. The last half century has seen a doubling in our consumption of water, with a degradation of water quality and a rapidly expanding gap between rich and poor countries on the planet. The result is a global crises where children born in developed world end up drinking 30-50 times the water of a child in a developing nation.

Beginning Sunday, March 16 through Saturday, March 22, 2008, UNICEF will be spearheading an initiative to raise money for clean drinking water for those in need. The initiative is called the TAP Project and the plan is simple. Restaurants nationwide are asked to participate in this great cause by simply inviting customers who typically get TAP water for free to donate a minimum of $1 for their tap water to this cause. That one dollar dollar will give a child clean drinking water for 40 days. The TAP Project site provides a simple outline of the initiative and is asking for volunteers to step up and sign up as participating restaurants, and volunteers who can recruit restaurants.

Currently, UNICEF provides access to safe water and sanitation facilities while promoting safe hygiene practices in more than 90 countries. By 2015, UNICEF's goal is to reduce the number of people without safe water and basic sanitation by 50 percent...at the scale of the current crises it will require 200,000 people to be connected to clean water and 400,000 to improved sanitation - EVERY DAY.

Make a difference in your world - go to the TAP Project site and see what you can do to be part of the world change www.tapproject.org

Nice post! The Tap Project is a fun and great fundraiser. Check out the Tap blog on the UNICEF USA website for more info! http://fieldnotes.unicefusa.org/