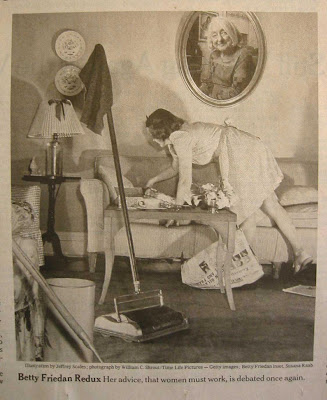 My Mother was a frustrated housewife. I was too, until circumstance laid a destiny at the doorstep much bigger than I ever imagined. I’ve come to believe if marriage fostered positive role modeling, I wouldn't have ended up disempowering myself eighteen years later as a mother and a wife. The women’s role in the home hasn’t evolved all that much since the days of my mother in the fifties.

Despite the sexual revolution and the women’s lib movement, where women acted out the role of men by donning briefcases and declaring their emotional invincibility, an authentic change in the wide Jungian unconscious has yet to be forthcoming. There exists an “ancestral code in women” (and men alike), one that simply does not buy into the ‘traditional’ household model that asks for women to give up it’s truth (for the sake of the family – aka “the mother/the good martyr). That “code” is bigger and more powerful than the social mores that attract women like moths to a flame on ideas that demand unhealthy self sacrifice (in the home, or the office). What women are then left with is what often feels like a dark and dirty secret, that she was actually “someone else” before her family…and she can be that someone else (or an evolved version of that) again.

I rediscovered my passion for music at the age of forty, and in that reconnected with my inner self – my inner code. Starting a band, writing a rock musical and staging events across the country were not my family’s idea of what they hoped Mom’s new hobby would entail. When I shrink wrapped my car with signage that said, ‘Housewives On Prozac’, not just a band, it’s a way of life, my sons were mortified. They refused to get in my car. It was obvious that it was okay for me to play my guitar “in the closet,” but God(dess) forbid I take my love of music public. No matter that every rap star in New York City has a van advertising his project. This is male territory, not mom territory.

To the extent that a woman is able to admit her power, worth, and ‘self’ expression, inside marriage and family, is the extent to which she can really embark on her life journey, and serve as a good example to her children. To be an individual first, and a mother second, is a huge shift in consciousness.

The fact is, as long as women indulge their personal time in venues that are exclusively for the sake of beauty and social norms IE: getting manicures, facials, shopping trips and hair done, some huge part of the essential self will be left behind. Eventually a parent dies, a child gets sick, a lump is discovered, old age or job loss set in. Each of these challenges becomes an opportunity for self-reflection and the posing of meaningful questions, like “Why am I here?” What is it I want to do with this one wild and precious life?

When I fell ill, my world shrank to the size of a bedroom. With blinds closed and doors locked, I came to understand that Spirit wants each of us to uncover our sacred, beautiful self, and express this ‘Self’ creatively, constructively, and in the most exuberant, manifestation possible. That is the nature, simply said, of our nature. To go against that is to try to “fit a square peg in a round hole,” as they say. Which is why for many women, motherhood is wrought with struggle. Duty for duty’s sake lacks vitality and sincerity and therefore is empty -- nothing more than an obligation fulfilled. This is not love. Love is not oppressive or oppressing. Love is expansive, full, understanding, kind, supportive, nurturing and without judgment. We must get in touch with our love, to peacefully express love for our children.

There is a radical Motherhood Movement demanding every mother’s liberation. Liberation to creativity, personal power, and self-worth within the home. Not just as cooks, cleaners, and caretakers, but as full-fledged human beings engaged in a journey guiding them towards awakened consciousness. This is true for working women as well as stay at home moms. This is an issue across the board for modern mothers. The future takes shape according to our visions and ideas with regard to the possibility of things.

Two of my sons are now driving age. The third will be eligible in the next two years. I won’t have to worry about carting them around in the ‘Housewives On Prozac’ mobile much longer. I can enjoy the thumbs up, horn toots and laughter along the highway wherever I go, without subjecting the children to this embarrassment. That’s fine with me. Color me proud. I am learning to live out loud.


Joy Rose is a contributing columnist on The Lohasian. Her column "Living Loud With Joy Rose" offers powerful self development tools meant to inspire and mobilize women to create an extraordinary life. Joy is the Founder and President of The Motherhood Foundation and Mamapalooza; a multi platform event, music production and entertainment development company that specializes in creating media brands to empower mothers and other women nationwide. Mamapalooza's unique message reaches an estimated five million consumers each year.

Now my kids are in their mid to late teens I'm discovering passions I never knew I had because my life was always focussed on being a mother. I don't regret being a mother at all. But it's great to be in my late thirties and re-discovering life post-children.