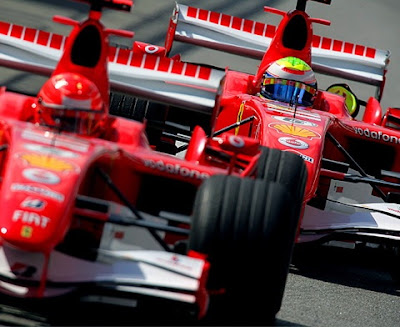 Formula and the European Parliaments are revving up to help drive the Eco-friendly automotive industry. The EU Parliament has just announced that it is asking that Formula One officially change various policies to get more Eco-friendly. The announcement came as part of a EU Parliament report.

The FIA (the sports governing body) has already made several noteworthy Eco-friendly adjustments in the sport thanks in part to the green-centric thinking of FIA president Max Mosley. The sport has already begun to adopt the use of smaller engines, bio-fuels and electronic energy recovery systems. Just this past May 2007 the FIA partnered with Ricardo (clean engine specialists) to launch the bio fuel initiative, and had made an announcement in September of 07’ that Formula One will include hybrids by 2010. But the EU believes more change (and probably more policy oriented change) is necessary, as Formula One is a massive influence on the automotive industry as a whole. According Mosely, the statement by the Parliament is actually good news for validating the leading role of the FIA and Formula One is the automotive biz.

FIA president Max Mosley said: “It is immensely satisfying that the European Parliament recognizes motor sport’s role in developing environmentally-friendly technologies and supports the work undertaken by the FIA in its campaign to make motoring more sustainable in the future."

“With the support of the motor manufacturers competing in formula one and with the engineering expertise unique to the sport, the new technical regulations will accelerate the introduction of energy-efficient technologies into the domestic car market,” he added.

Formula One just might have given speed junkies another reason to love the sport.

To go the Formula One official web site, go to www.formula1.com