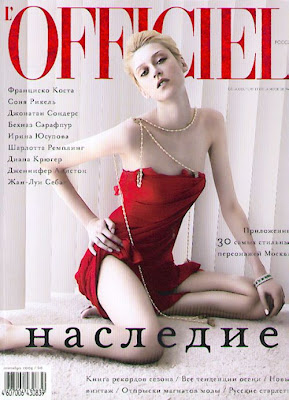 (L'Officiel Russian Edition)
You might have heard of "greenwashing," but what about "spiritwashing?"

L'Officiel Fashion Magazine announced that its opening issue for the year will focus on spirituality, from a fashion perspective. According to Ami Patel, Creative Director at L'Officiel, "We decided to demystify spirituality for our readers in tangible terms they would understand, like beauty. Beauty is an integral aspect of spirituality."

What is really interesting here is that, according to Ms. Patel, it seems L'Officiel's readers do not understand spirituality, that is unless there is designer associated. Nice one. She then went on to say, "According to Chanel, luxury is not luxury unless its comfortable...and according to me, meditation is the greatest luxury."

Although the folks at Chanel might appreciate being lumped in with the stuff of God/s - we're not convinced that the step to enlightenment involves stilettos or a $500 pair of shades.