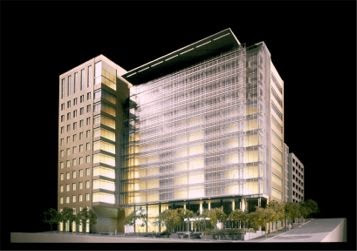 The green building trend is extending into a new realm - the Justice system. A new initiative spearheaded by the Academy of Architecture for Justice (AAJ) is creating a committee that would specialize in the promotion of green building of justice and law facilities , including courts, police stations, juvenile detention centers amongst others.

The plan would involve a new LEED certification specifically for the justice sector (LEED for Justice). One example of the "green justice" movement is the Seattle Justice Center (pictured above and completed in 2002) which earned an LEED-NC silver certification for Eco-friendly design elements like its green roof and water harvesting system. This new initiative by the AAJ hopes to turn sites such as the Seattle Justice Center into shining early examples of an emerging trend in government building.

For more information on the AAJ and the LEED for Justice - go to www.aia.org