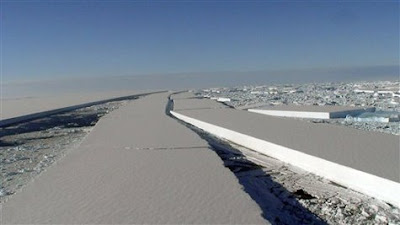 In case you didn't hear the news (or the thud), a chunk of ice that's a whopping mile and a half in size, has started to fall in the Antarctic. The event has caused an uproar in the scientific community.

"Now there's enough evidence to show that there is accelerated melting of some of these large bodies of ice; west Antarctic ice-sheet, the Greenland ice-sheet," Rajendra Pachauri, chairman of the Intergovernmental Panel on Climate Change (IPCC), told reporters at the European Parliament in Brussels.

"It's an issue of great concern," added Pachauri, who addressed the parliament's environmental committee on Wednesday.

Scientists have been monitoring this region, known as the Wilkins Ice Shelf, since the mid 1980's for signs of retreat - which began to pick up in the late 1980's. By March of 1998, images were recorded what appeared to be of a large break-up event along the northwestern front (the current break was in the southwestern front). In turn, the recent collapse was hardly a surprise to the scientific community, although they did expect this event to make headlines, perhaps a decade, to a decade and a half from now.

Here is the most recent video footage of the actual site of the event, courtesy of Reuters.