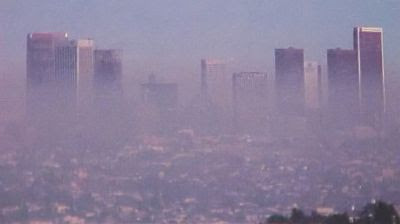 Getting sick from the growing smog...literally or figuratively? Well, big industries are waging a full out battle to block new regulation to reduce the allowable amount of ozone (aka smog) in our air.

Within the next few weeks the Environmental Protection Agency (EPA) is set to decide weather our air gets cleaner, or increasingly filthy. With health experts pushing for tighter regulation and citing extensive data showing millions (especially young children and the elderly) of people's health being deteriorated due to increasingly high levels of smog, the decision would seem simple (one would think). But the opposition, without surprise, reads like the who's who of big industry, including; manufacturers, automakers, electric utilities, grocers and cement makers - all of whom met with White House officials to keep the health standards unchanged, arguing the impacts of such changes on the economy.

"It could trigger layoffs nationwide, further eroding U.S. economic competitiveness," Sen. George Voinovich of economically stressed Ohio, as six other Republican senators recently wrote of similar sentiments to the EPA. While more than a dozen senators have weighed in against any change, some twenty two House members told the EPA it should absolutely abide by "overwhelming scientific evidence in favor of stronger smog standards."

Recently several representatives from oil and chemical companies stepped in and met at Capitol Hill, meetings which clearly lead to the Agriculture Department urging with the EPA to not tamper with existing standards. But the EPA has made clear that existing standards that allow for eighty parts of ozone for every billion parts of air, simply do not sufficiently provide protection from asthma, heart attacks and respiratory problems.

The drop to even 75 parts per billion standard will run $9.8 billion, while a reduction to 70 parts per billion ozone would run $22 billion annually. While the costs seems astronomical, the EPA notes that the expense is simply and easily offset by the reduction in health care costs. The decision is to be made shortly, as a court order has been issued forcing the EPA to decide by mid-March.

Industry's await the decision with bated breath (excuse the pun), as we hold ours for fear for our health. Stay tuned for updates...the saga is bound to get more complicated in the coming weeks as the decision is announced.

Go to the EPA site for more info www.epa.gov