Is the Road to Happiness Paved With Riches ?
New Research Might Surprise You. 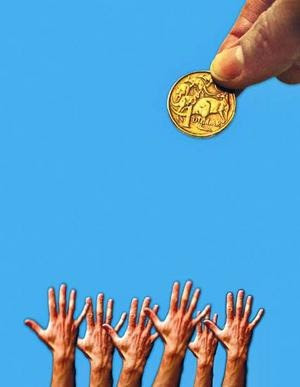 --body + mind + spirit--
Happiness is perhaps as much of a "holy grail" as is immortality. It is ultimately the motivation for all we do, and helps us define our relationship to the journey of our life; life is "on track" or its "off track" depending on how happy we are. Emotionally healthy people use happiness as a compass in choosing friends, lovers, hobbies, jobs - the "it or he/she makes me happy" is the factor behind those supposedly "right" decisions. But for many happiness comes with access to financial means. Millions believe that those with millions, have more happiness. This belief puts many on the quest for riches, sometimes at the expense of all else. But is there a correlation between money and happiness ? Are million of people on a misguided quest, or are they onto something ? The answer might surprise you.

According to a recent study at the University of British Columbia, extra income was in fact linked to happiness, but is was how that income was spent that was the true source of happiness, and not the income itself. This conclusion came as a result of asking over 600 Americans to rate their happiness and then supply detailed information on earnings and spending. They found that extra income was linked to personal happiness, but personal spending was not. Only pro-social spending (gifts to others or charity) correlated to happiness. Researcher Elizabeth Dunn analyzed the data and went one step further, by testing the happiness of a group of 16 employees at a Boston firm before and after they received a profit sharing bonus of $5000. She analyzed the finding using three factors, including; initial happiness and personal and pro-social spending. Once again, the results pointed to the same conclusion.

"The manner in which they spent the bonus was a more important predictor of their happiness that the size of the bonus itself," says Dunn.

Dunn and her colleagues took their research, one step further. They asked 46 people to rate their happiness after giving $5-$20, with specific instructions on how the money should be spent. Those told to spend it on themselves were found to be slightly less happy when interviewed later the same day, but subjects who gave the money away reported increased happiness.

"Very minor alterations in spending allocations – as little as $5 – may be enough to produce real gains in happiness on a given day," concludes Dunn.

So perhaps the quest for riches is actually an intuitive drive - somehow mixed into a spiritual soup with our innate need to "give back." Maybe wanting riches is not what makes us misguided- its what we do with those riches (big or small) that determines how misguided we are.

Inspired on an article by Jim Giles, in New Science magazine