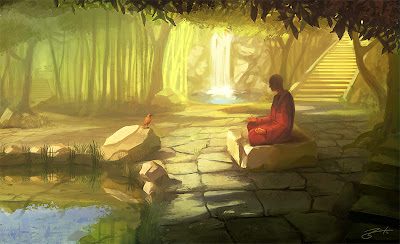 --body + mind + spirit--
Can we make a kinder, gentler world by just willing it ? Maybe, or maybe not. But according to a recent study, we can make a more compassionate world through meditation.

A new study published in the March 26th issue of the Public Library of Science showed that meditation that focuses on kindness and compassion actually causes physiological changes in the brain. The study involved 16 Tibetan monks, 10,000 hours of meditation and 16 volunteers with no previous mediatation experience. The monks undertook the training of compassionate meditation technique to the volunteers over a period of two weeks.

The next step of the study took participants (both those trained and untrained) to practice compassionate meditation while inside a functional magnetic resonance imaging machine (MRI). The participants heard sounds designed to provoke an empathetic response, such as a distressed woman calling out, as well as positive sounds (a baby laughing) and neutral sounds (background noise at a restaurant). The findings were clear and startling; those who practiced the compassionate meditation saw direct impact of increased activity in the area of the brain called the insula, which is responsible for emotions and functioning associated with compassion and altruism.

The co-author of the study, Antoine Lutz of the University of Wisconsin-Madison stated “Potentially one can train oneself to behave in a way which is more benevolent and altruistic.”

So perhaps one can will a kinder and gentler world...just by willing it one Om at a time.

Good news this, it’s quite encouraging!

I’m not sure that, during times that I’ve dabbled in metta meditation, I’ve had any more of an automatically compassionate reaction than other times.

However, I do find that during such a meditation session, any time that I snapped or jumped at someone during that day will quickly come up, leading to much embarrassment!

This then makes me pause a little before jumping down someone’s throat the next day.

I guess if it has the desired affect, it works!