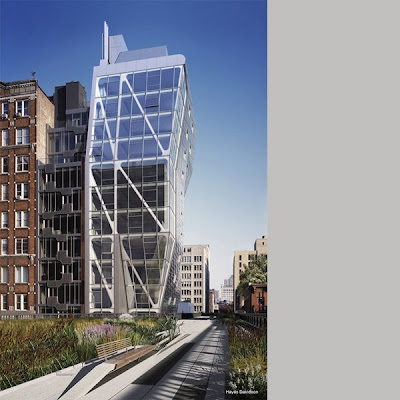 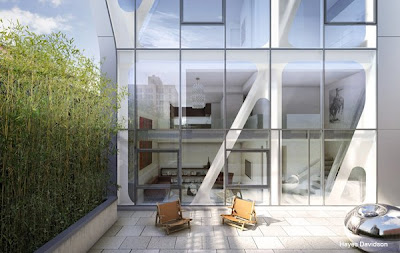 --art + architecture + design--
The High Line is one of those cool forgotten spots in New York City that use to only be known true insiders of the Big Apple. The site has stood as an abandoned stretch of 1.45 miles of a section of an elevated freight railroad along the lower west side of New York City. Built in the 1930's by the New York Central it ran between 34th street near the Javitaz Convention Center and Gansevoort Street in the West Village. But since 1980, the site has stood abandoned, serving as a vestige of an era long ago.

In 2004, New York City committed $50million to establish a proposed park on the line, thanks in part to Friends of the High Line (a community action group). Not only is the site to be greened, but now a new exciting construction is set to go up, promising to be an ambitious LEED Gold Certified green building.

The building known as the High Line 23 (or HL23) and is a project of Neil M. Denari Architects. From natural ventilation to low VOC interior materials and water saving fixtures and appliances for its 11 condo homes (ranging from $2.7 - $10.5 million), the $22million dollar 39,200 condo tower promises to add a good green (and expensive) edge to the future of the Big Apple. The site is set to be completed by 2009.

For more information on the project, go to the Neil M.Denari SITE