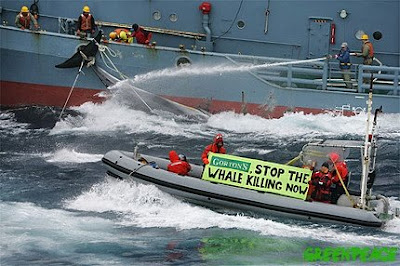 --trends + business + politics--
A Norwegian pro-whaling lobbying group is trying to convince the world that eating a whale can "save the planet."

The group called the High North Alliance is claiming that harpooning the animal causes less environmental impact than farming livestock. The survey looked at the whaling boat fuel use and showed that 2.2lbs of whale meat represented 4.2 lbs of greenhouse gases -vs.- 15.8 for beef, 6.4 for pork and 4.6 for chicken. The study concluded that greenhouse emission caused by one meal of beef were equivalent to eight meals of whale meat. The argument is surely intended to pin the environmental community straight up against the animal rights groups, and drive focus away from the recent negative international attention given to whalers in Japan.

"Basically it turns out that the best thing you can do for the planet is to eat whale meat compared to other types of meat," said Rune Froevik of the High North Alliance, which represents the interests of coastal communities in the Arctic.

But Greenpeace is disturbed by the findings and are condemning the group for not recognizing the importance of the animal extinction threat.

"The survival of a species is more important than lower greenhouse gas emissions from eating it," said Truls Gulowsen of Greenpeace. "Almost every food is more climate friendly than meat. Most fish and seafood has similarly low emissions."

The International Whaling Commission (IWC) will hold a special meeting in London this week to review the deadlock between pro- and anti-whaling nations. This issue comes on the heels of massive protests against whaling in Japan over the last several weeks. The issue is bound to heat up in the coming weeks - regardless of which way the commission decides, with a swell of support on both sides of the fence.

Here is video coverage courtesy of Aljazeera of a recent whaling Greenpeace protest on the seas.