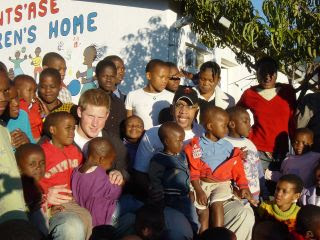 --celebrity + charity + global relief--
Sentebale (translated to mean "forget me not"), a charity set up by Prince Harry to provide assistance to AIDS orphans in Southern Africa (Lesotho) seems to have "forgotten" to hand out any of the $2.5 million it has raised since its launch two years ago.

The charity, set up in honor of Harry's late mother Princess Diana, received $325,000 for a concert last year and $1.6 million from a British Red Cross Lesotho fund. But the charity has only distributed $182,000 , while paying some $543,000 on staffing expenses, with one official getting a whopping salary of $195,000 according to accounts filed by the Charity Commission.

Officials of the charity cite that it takes time to establish the organization before handing out money. But two years and over half a million dollars is a whole lot of waiting and spending, none of which I am sure was made public to any of their generous donors. Prince Harry said he was "bitterly disappointed" by the charity's performance and said he desperatly wanted the money sent as soon as possible to the orphans he met in Lesotho.

Valuable lesson learned. Big names behind charitable causes do not offer a seal of guarantee on good performance (nor good business practice). Let's hope Harry puts some of his high influence muscle to move those generous funds where they belong...in the hands of ailing children and not in the bulging pockets of Sentebale executives.