Protest in the Digital Age: How "Micro Blogging" Helped Produce a Peace March

--trends + business + politics--
Twitter, the "micro blogging" service whose members are asked to answer only one question "what are you doing now," actually helped coordinate something more important than one's pizza order or the decision to nap or not (the usual posts one can expect). On March 15th anti war protesters used the service to coordinate a sizable protest in the heart of San Francisco.

To mark the fifth anniversary of the US occupation of Iraq, San Francisco protesters coordinated their movements throughout the day by texting on their mobile phones (using the Twitter service). The group called "The Direct Action to Stop the War" group, used the technology to avoid being arrested by the police, as organizers typically would use noisey and obvious walkie-talkies and bullhorns for coordinating efforts. The protest did none-the-less lead to the arrest of 143 people in direct actions throughout San Francisco. San Francisco was one of more than 300 U.S. cities to resist the war and occupation.

To view the group's text log for the day of the protest, go HERE. 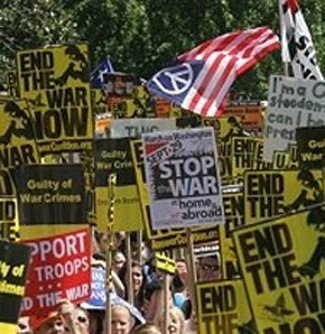