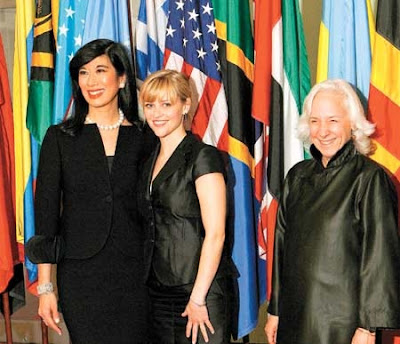 --celebrity + charity + global relief--
Oscar winner Reese Witherspoon met with U.N on Tuesday as part of an effort to raise money for a UNIFEM campaign, and fund rive, to end violence against women worldwide. UNIFEM, founded in 1976, is the women's fund at the United Nations which is used to provide financial and technical assistance to foster gender equality and women's empowerment.

"Two of every three people living in poverty in the world are women," UNIFEM director Joanne Sandler said. "And the violence against them is a pandemic hidden among the estimated $9.5 billion that criminal networks earn from human trafficking, mostly women and children."

Witherspoon is promoting a new Women's Empowerment Bracelet which she hopes will raise awareness against domestic violence issues. The initiative is done in collaboration with cosmetics giant AVON (for whom Witherspoon is the Global Ambassador for Women's Empowerment), who has vowed to match the first $500,000 raised in the campaign. The money from the campaign will be used to provide more education and job training for women as well to enforce laws that benefit their standing in various cultures worldwide.

To support this great cause, buy the Women's Empowerment Bracelet for only $3, at www.AVON.com