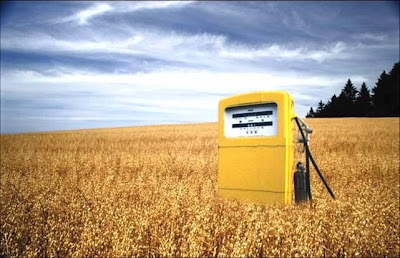 --trends + business + politics--
The international food price crises has lifted the intersection of global poverty and climate change, and thrust it into the mainstream psyche. Two issues that until recently were viewed by many as separate but equally concerning predicaments, have now been meshed together around the ultimate impact of Bio-fuels; creating nothing short of a life and death tug of war impacting millions. Now with food prices sky rocketing, and even the middle class being hit by the increase, the issues that seemed to concern "others" have literally hit home and drawn much needed attention. The international community is scrambling for answers to a web of complex issues that ultimately call for collaboration between industry, government and science.

The United Nations World Food Programme (WFP) says an extra 100 million people cannot afford enough food because of higher prices. Food has become increasingly expensive, triggering unrest in several countries. As a result, the WFP has launched a massive fund-raising appeal, saying it needs an extra $755m to purchase the necessary food to meet its obligations. On Monday, a two day meeting had been called by the UN Secretary General Ban-Ki Moon, in Switzerland, to address the mounting crises. The meeting is set to include Robert Zoellick and WTO Director General Pascal Lamy, along with 20 other agencies, including Oxfam, who has been outspoken against various recent suggested aid strategies.

"Aid is urgently needed to address the immediate threat to poor people posed by higher food prices but money is not enough. World leaders must take this opportunity to address structural problems such as under-investment in agriculture and unfair trade rules, which are exacerbating the problem," said Celine Charveriat, Oxfam International's Deputy Advocacy Director.

In addition, high on Oxfam's list of recommendations is an end to current bio fuels mandates in rich countries, widely recognized as fuelling price rises and speculation. Bio fuel production has seen a massive surge due to a rise in oil prices and fears over climate change (driving the use of maize to make bio-fuels while pushing up food prices). Experts have predicted that bio fuels targets may result in an extra 600m people being hungry by 2025.

"Bio fuels are not only a major cause of increasing prices but are also linked to labour rights abuses and land grabs in developing countries. Furthermore, research suggests they may make climate change worse. In this context it is absolute madness to have mandatory targets." said Charveriat.

In the mean time the Bio-fuel industry is experiencing a massive surge, with no expectation of a slow down. In addition supporters of the industry make claims that Bio-fuel production brings jobs and new opportunities to farmers and rural areas. But skeptics point out that the extent to which farmers will be able to see the benefits of switching to Bio fuels production depends on many conditions, including access to markets and access to technological innovation, neither of which is easy to access. 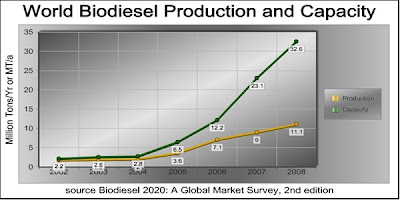 "A fundamental transition in global fuel production is now happening. In the year 2007, there were only 20 oil producing nations supplying the needs of over 200 nations. By the year 2010, more than 200 nations will become bio diesel producing nations and suppliers. The world is also entering a new era of participation by emerging market nations in global green energy production for transport fuels." (Bio Diesel 2020 Report)

Below is a list of other graphs that provide a snapshot on the complexity of the issue with rising populations, increase in food costs, and the impact on massive regions of the world. Bio fuel production has been blamed by critics of fueling this crises.

In addition to concerns with fueling poverty, the environmental impact concerns others who are insisting on tight regulations on the industry. If not well managed, bio fuel production can lead to deforestation, a loss of biodiversity, and excessive use of fertilisers and pesticides. Such activities would degrade the land and water that poor people depend on.

In the battle of good will, of aiding poverty -vs- aiding climate change...Bio-fuels provide the answer to both or none, clearly depending on who you ask.