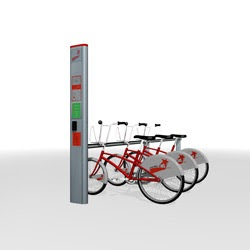 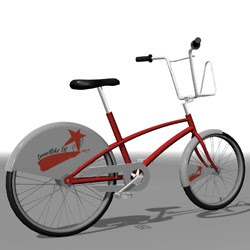 --trends + business + politics--
If you were looking for a reason to love Washington DC again...their new bike rental program might be your ticket. Seems like the town known for its politicking has gotten a little more earth friendly thanks to the folks at pioneer company Clean Channel Outdoor.

The company joined forces with the Washington DC District Department of Transportation and is launching a self service public bike rental program (first in the U.S). The company intends to launch with ten locations and about 100 bikes, charging users a modest annual subscription fee of $39.99 per year, for which subscribers will get a SmartBike DC card that lets them use bikes at any station for up to three hours at a time, and can be returned at any SmartBike station

Although the operation sounds pretty simple, Clean Channel has actually adopted some savvy technology. Some high tech features include the digital sending of data from all docking stations to a central server and station terminal (allowing for monitoring of effective operation of each location) and supervision tools and remote processing to analyze the condition of each bicycle station and the bicycles there.

The very first self-service bike rental program was in the city of Rennes in France in 1998, and subsequently, programs rapidly spread to Scandinavia and Spain and now operates in thirteen cities throughout Europe. Hopefully we will see the earth friendly programs come to other cities in the U.S struggling with traffic congestion (and the resulting emissions) !

For more information on the D.C SmartBike Program, go to their SITE