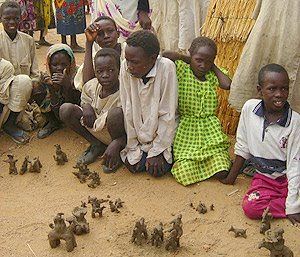 --celebrity + charity + global relief--
The United Nations African Union peace keeping force has been deployed for over a year now and yet so little has been accomplished. Of the four million people affected by the conflict in Darfur, 1.8 million are children under eighteen. Of the 2.3 million people who have been displaced, one million are children. Since April 2006, 120,000 displaced more children have joined the number due to the conflict. With inadequate attention, support and aid, the horrifying numbers keep growing daily.

Just this past February Sudanese forces and government backed militias attacked villages in West Darfur causing some 800 children between 12 and 18 to be left unaccounted for by the attack. This month for thousands of children who are turning five, their birthdays are marked by actually never having even known peace. Children who have survived attacks remain traumatized, while those who live outside of caps remain fearful of attacks on their villages.

Amnesty International is asking for your help. With a few simple prompts on their site you can write a letter to Mr Rodolphe Adada, the Head of UNAMID – the African Union-United Nations Hybrid Operation (which acts to support the implementation of the Darfur Peace Agreement, as well as to protect its personnel and civilians). The letter will be a call to Mr Adada to take steps to effectively protect the children in Darfur.

Take a minute to make your voice HERE