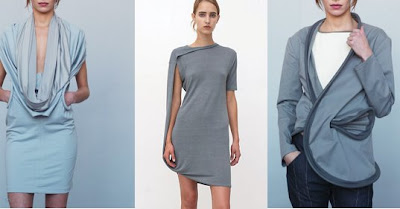 --fashion + travel + music--
Remember days when being trendy meant wearing black rubber bracelets by the dozen ala Madonna or sporting grunge as an ode to Nirvana. Long gone are days where trend and fashion are defined by pop culture, as "green" culture has taken hold. These days being at the edge of style means being conscious not only of the color and lines of your designer picks, but also of the origins of the fabrics and the practices of the company manufacturing them. Looking "hot" means being smart in 2008.

According to a new report from Media Post, the GenY and Millenials generation now represent a whopping $520 billion in buying power and are increasingly including clothing in the organic purchases.

"Gen Y and the Millennials are really driving this trend," says Barbie M. Casasus, senior director and consumer strategist at Iconoculture, based in Minneapolis, adding that 20- to-28-year-olds represent about $520 billion in buying power and say they are willing to pay more for organic and fair-trade products. "And they're pretty passionate about it. While it's a category that is still in its infancy, the demand is growing."

Companies are building significant business' by focusing on the green culture. Brands such as Nau and Indigenous Designs have gone after these consumers and have successfully reached them. Now big household name brands such as Perry Ellis and American Apparel are heading into the market with their own fair trade and organic lines.

“Even mainstream retailers are weaving green into their overall merchandise,” David Wigder, SVP of Digitas and author of Marketing Green, says. “Moreover, as their cost drops over time, more sustainable fabrics will naturally be included in mainstream clothing.”

This is all good news for consumers. As more players enter the field, competition will help bring prices down as well as provide more breadth of product in more locations. Who would have thought that the generation that bought into slacking, grunge and heroine chic marketing (remember that) would be fueling an industry based on mindfulness, wellness and accountability. Ha...and they said we didn't care :)!

(Image above from the Eco-Fashion line SANS)