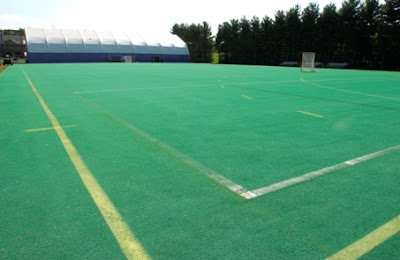 It's sort of a perfect metaphor to hit the headlines on Earth Day - "Fake Grass Kills." O.K well maybe that's not the headline that inspired this post, but it might as well have been.

According to the Associated Press, the U.S Consumer Product Safety Commission is looking into health hazards associated with the lead content in artificial turf installed at schools, parks and stadiums across the country. Of course, to no surprise, the artificial turf industry denied its products are dangerous.

Jon Pritchett, chief executive of General Sports Venue, the Raleigh, North Carolina-based licensee of AstroTurf products in the United States, said the company's tests have shown a low risk of exposure to lead.

"Obviously, we take very seriously any concerns about the safety of our products, and this is no exception," Pritchett said.

More industry experts were quick to chime in, such as Rick Doyle, president of the Synthetic Turf Council. According to Doyle, the lead in the product is fixed in place in the nylon and does not leach out, and thus poses no health risk. He also said that in recent years, manufacturers have begun offering lead-free nylon surfaces.

"In the 40 years that synthetic sports turf has been in use in the United States and around the world, not one person has ever reported any ill effects related to the material composition of the fibers," he said.

The United States has about 3,500 synthetic playing fields made of various materials, including nylon and polyethylene, and about 800 are installed each year at schools, colleges, parks and stadiums, according to the industry's Synthetic Turf Council. Pigment containing lead chromate is used in some surfaces to make the turf green and hold its color in sunlight. But it is not clear how widely the compound is used.

I wonder how long it will take for us to realize that age and wear is not something that needs to be synthetically modified. Weather its toxic vinyl on our houses that stands the test of time to look perfect with each passing decade, or a or face injected to artificial"perfection" with chemicals we dare not ingest otherwise or a ball park sprayed so green it would shame Alpine fields...we can't expect anything in life or nature to look or be perfect without the infusion of some highly imperfect ( and all too often, simply toxic) element.

As long as we don't embrace the nature cycles and wear of life, headlines such as these will continue to persist and both shock or puzzle readers.