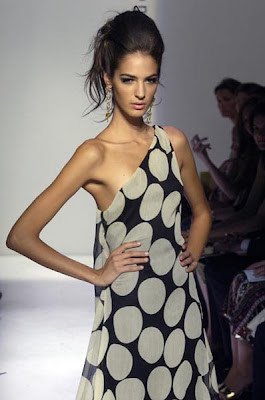 --.op-Ed--
French fashion insiders are in an uproar over recent news of the French parliament's lower house decision to adopt a groundbreaking bill that would make it illegal for anyone - including fashion magazines, advertisers and Web sites - to publicly incite extreme thinness.

The National Assembly approved the bill in a series of votes after the legislation won unanimous support from the ruling conservative UMP party. It goes to the Senate in the coming weeks.. The decision has caused a rift in Paris between an industry banking on a particular vision of beauty to sell millions in clothes and a government that is concerned by the growing number of anorexics in France, now estimated between 30,000-40,000 French women (French Health Ministry).

Conservative lawmaker Valery Boyer, author of the law, argued that encouraging anorexia or severe weight loss should be punishable in court. In an Associated Press interview just before the parliamentary session, Boyer said "It would give judges the power to imprison and fine offenders up to $47,000 if found guilty of "inciting others to deprive themselves of food" to an "excessive" degree." But fashion insiders pushed back.

Didier Grumbach, president of the influential French Federation of Couture, replied to the decision, "Never will we accept in our profession that a judge decides if a young girl is skinny or not skinny," he said. "That doesn't exist in the world, and it will certainly not exist in France."

But is the problem really the clothes, the models or the industry, or the consumer who buys into it hook, bait and sinker? I mean American late night TV tries to sell us on overnight millionaire schemes as McDonalds tempts us with hormone laden Big Macs - isn't it up to us to decide if buy into either proposition ? Fashion insiders would certainly like us to believe that.

But let's get real, shall we. The issue of selling beauty and sex appeal is unfortunately far more complex and entangled in issues of power, self worth and social status. No one feels more valuable eating a a burger and fries. Size zero eighteen year olds are selling more than underpants, they are selling you on a dream of a perfect life that starts with a perfect bust line. It is the promise of "making it, "being it, " and "having it" all. The mainstream has so bought into the idea of appearance as social currency that it has become globally bankable; causing industry uproars and parliamentary decisions. They sell the dream that we buy into, even if it realistically lets us down every time. We know we will never be or have that girl on the billboard, but buying a piece of whatever she represents, brings us that much closer to the dream. We sip from this "kool aid" in pretty crystal champagne glasses revelling in the delusion. Yes, we are very much to blame.

But beyond the issue of the consumer, consumer psychology or the obvious consumer responsibility in the matter, is the question of weather there needs to be any regulation in terms of what images and ideas we sell to the public. The question is, does government have a right to regulate what is an acceptable message to send to the public ? The answer to that is simply - yes. In the U.S we can't advertise guns, we can't advertise cigarettes on TV (and need to include health risks in all other advertising), and as of late we can't advertise sugary cereals to kids. The government, in cases with serious risks to the population, steps in and weighs in. The fashion industry's claim that "too skinny" is a subjective idea, makes as much sense as the subjectivity of something having too much sugar or not - - yes, if need be, we can actually measure both in grams.

Here's the thing Mr. Grumbach, the world actually does decide if a girl is too skinny or not. Millions of girls actually even decide for themselves - even those that are a size zero who still decide they are too fat. They, like millions of others who may not fall prey to illness as a result, fill their inner "personal value void" with aspirations to what you are selling. No you as an industry are not blame for our spiritual vacancies that allow for this to happen, but you are to blame as the "dealer" of this "fix." And yes, a judge can decide if a girl is skinny or not, I personally think they have had far more complex matters to resolve than the subjectivity of a waist line.

Good going France...another reason to love you, beyond the good cheese and wine !