Los Angeles as the Most Eco-Friendly City in U.S ?
New Law Aspires to Turn City of Glitz, Green 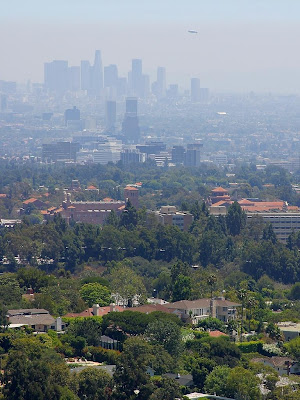 --trends + business + politics--
For those of you who have ever driven into Los Angeles and seen the smog cloud that sits on LA resembling a dirty cotton ball, you will find the headline sceptical at best. But latest news might at least inspire nods for LA's good intentions to clean up their act. This past week LA City Council passed a law requiring that any construction exceeding 50 units or 50,000 sq. feet must comply with LEED building standards.

"Given that greenhouse gas emissions from buildings account for more than 40 percent of global warming pollution, the Los Angeles Green Building ordinance is a good first step towards building an energy-efficient, climate friendly sustainable city," said Global Green USA President Matt Petersen. "While certainly not an end destination, it is important that Los Angeles has become the first big city to codify a private sector green building program," he said.

Mayor Antonio Villairagosa is thrilled by the move and said the initiative will cut emissions by 80,000 tons by 2012 - equivalent to taking 15,000 cars off the road (which seems like the approximately the number of cars stuck in gridlock on any LA freeway at rush hour). The new move is part of larger plan laid out the mayor last year to reduce LA's footprint to below 1990 levels by 2030.

"Our City is growing fast and growing up, and we're holding the private sector accountable to their commitment to be friends to our environment," said Mayor Villaraigosa."Already the City of Los Angeles has the largest, most aggressive municipal green building plan of any large city in America. Now it's time for green building to go private," he said.