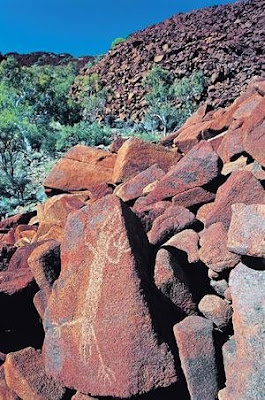 --art + architecture + design--
There is a war brewing between nothing less than culture and commerce in Western Australia. Minister Peter Garrett is taking a tough stand to protect 30,000 year old Aboriginal rock art from mining, and refusing to give the State Government control of the development of a region called the Burrap Peninsula. The area was listed as a national heritage site which gave the Commonwealth authority over it, under the Environment Protection and Biodiversity Conservation Act. But the State Government wants Mr Garrett to give up his control and approve development proposals, citing the need to remove "red tape"

"There's quite a confused legal situation if you like," said Eric Ripper, Western Australia's Deputy Premier and Minister for State Development, of the need for state and Commonwealth approval. His Government has drafted a bilateral agreement for the Commonwealth to transfer some of its powers, but Mr Garrett has yet to sign it.

"We want to share decision making (about future development)," said Mr Garrett, who is still negotiating the terms of the agreement. He said that negotiations were "constructive" but that the Commonwealth had an "important role to play in matters of national environment significance".

Archaeologists estimate that the rock art of the area comprises anywhere between 500,000 and 1 million engravings - encompassing the worlds largest collection of engravings and petroglyphs. The site and the engraving pre date both Stonehenge and the Egyptian pyramids. While Mr Garrett acknowledges the economic potential of industry in the area, which generates thousands of jobs and billions for the Australian economy, he said that environment and heritage values must be considered at the "front end" of any development proposals to minimise further destruction.

As the bureaucratic tug of war continues, an Aboriginal community in north-west Australia has warned companies operating in Burrap that it will fight to protect the ancient rock art of the area. The community set up the Ngarluma Aboriginal Corporation some three years ago after the Federal Court accepted that the community held native title in the area. The corporation later went on to enter into an agreement with the government to allow development of the area if the group was to have a controlling stake in the resulting work. Now the corporation finds itself battling for its own heritage.

"We are a small corporation and we're up against some huge multinational companies and they treat us like dirt," said Andrew Dowding from the NAC. "We're dealing with these determined companies and we're as determined as they are basically."

Will commerce win over culture ? Has heritage and legacy taken a second seat to economic interests again? Will 30,000 year old art work be turned to rubble in the interest of greed ? Stay tuned.

Based on a story from The Age.