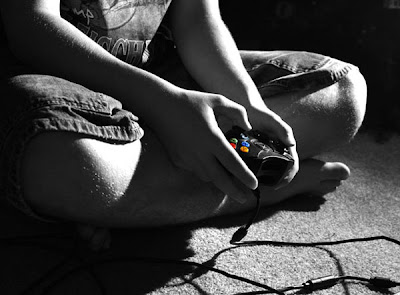 --.op-Ed--
Well, it seems the tests are in - playing video's that kill and dismember is good for you. At least that's the "Brooklyn Bridge" that Develop Magazine and a group of psychologists at Middlesex University are trying to sell us this week.

Game Pro picked up the story and commented "we at GamePro believe the questionnaire will also help weed out blatant media-hungry opportunists who have used the relatively young video game genre as a platform for blatant self-promotion." At the risk of coming off as a blatant media hungry opportunist, I'll go forth and as a very scientific question...who is drinking the kool aid folks ?

The study sampled 292 World of Warcraft players, ages 12-83 years, who were asked to complete a questionnaire on anger, aggression and personality and then played the game for two hours. After this time they were they were asked to complete the test again. The psychologists found overall the gamers were more likely to feel calm or tired after playing– but there were differences depending on sex, age and personality. So let me just get this straight folks - a group of video game players were asked to play an aggressive video game for two hours straight and afterwards they were tired or calm, based on a questionnaire? Just a thought here, but how about if we take that same sampling and put them into a congested New York City subway in the dead of summer for two hours and then let them out and ask them how they feel. My guess would be tired and calm. Let's try sticking them on a roller coaster for two hours, then getting them off and asking the same question - let me go out on a limb here...I am guessing - still, tired and calm. Generally speaking, after any high stress activity we feel "spent."

Our adrenaline comes to a halt and the release from a high stress situation seems almost cathartic. Ask any mother of young kinds what the moments, following the mad morning rush of getting kids to school, feel like...yes...you guessed it, tired and calm. I especially appreciate that they included an 83 year old in the sampling...my guess, as the child of a parent in their seventies, is that they might feel tired after two hours of Donkey Kong (for those old enough to remember that). And its a good thing they asked those twelve year olds to answer a questionnaire on the personality and states of aggression, because God knows a twelve year old can certainly identify sources and scales of their aggression and why they become calm. Anyone raising an adolescent or teen will find this type of claim towards such profound self examination somewhat, well...questionable.

More so than the question of the study or the findings, I am curious about the objective. Was the study to assess the value of delivering interactive experience of gross violence ? What is the next step - assessing if actual decapitation and animal cruelty versus perceived is also a stress reducer ? And who is funding these studies anyway (and why) ? I mean do we really need a study to tell us that images and interactive experiences of stabbings, shootings, beatings and murder are probably in a very best case scenario the stuff of "thin ice" as far as human conditioning.

In a world where 854 million people go hungry (and 10 million children under age 5 die of starvation), 1 in 6 people go without safe drinking water, a climate crises on our hands that is creating more poverty and illness every day - we need to ask ourselves, what are we conditioning our youth to handle, and who are the parents funding this epidemic ? Where are the video games inspiring activism, compassion and collaboration? And better yet, let's ask ourselves (and those psychologists at Middlesex) why are so many engaging in the virtual world - at the expense of engaging in the real one?


(To see the original article in Develop Magazine - go HERE)