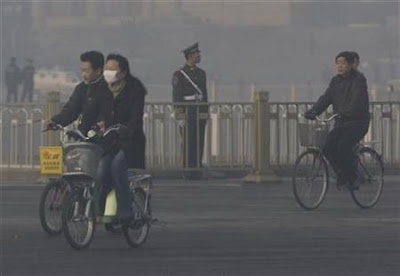 --trends + business + politics--
More news from the Olympic drama in Beijing. While Beijing has stated that they plan to take half of its 3.5 million cars off the roads and partially shut down industry in the capital and surrounding provinces for two months for the Olympics (to improve air quality), concerns continue that no shut down will do enough to allow for athletes to safely compete.

In the most recent turn of events, just yesterday, Hein Verbruggen (Chairman of the IOC coordination commission) said that there is a chance that athletes involved in endurance events can suffer health damage if they partook in the events for longer than an hour (e.g. cycling road races, marathons etc). One athlete, marathon record holder Haile Gebrselassie has already dropped out saying that the air quality in Beijing is simply too dangerous for his asthma condition. But as concerns mount the city makes claims to more "blue sky days", from 100 in 1998 to 246 last year (reassuring eh'?). Meanwhile organizers of the event are cooking up a "Plan B" scenario, by suggesting delaying events for a couple of days if air conditions become a concern.

Just wondering...but are all the spectators and press getting complimentary oxygen tanks ? I see a sponsorship opportunity there ...say, travel sized oxygen "tankettes" with a logo that says..."Fresh Air Brought You By Your Friends at Swiss Air." Or how about goody bags with free inhalers by the good folks at Merck ? The possibilities are truly endless.

Stay tuned for more twists and turns in the coming months, from the environmental soap opera that is the Beijing Games.