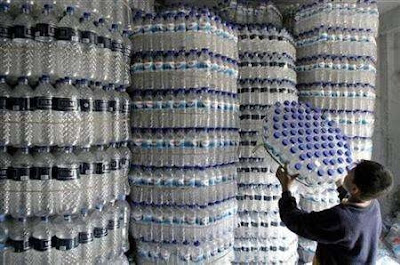 --body + mind + spirit--
Plastic has gone from being the industrial worlds salvation to the object often identified with its demise. From its negative impact to the environment, to its links to any number of diseases ranging from neurological damage to cancer; plastics are the new suspect substance on everyones' list. Canada has just decided to step up and set some hard line regulations for the plastic industry that will hopefully create a ripple effect worldwide.

Representatives have recently announced that Canada intends to list bisphenol A (BPA) as toxic, a designation that would essentially allow a ban on the manufacture, import, or sale of polycarbonate baby bottles. Polycarbonate is a type of shatter-resistant plastic made with BPA, dominating the North American baby bottle market. Baby food manufacturers will also be told to reduce the amount of BPA in resins lining the inside of infant formula cans, according to Federal Minister of Health Tony Clement. Canada would be the first country to ban BPA.

The American Chemistry Council, an industry association that represents BPA manufactures, has funded two studies used by both the European Union and the United States to support the position that BPA does not pose a health threat. But many studies have already shown that BPA mimics estrogen and has been linked to early onset of puberty, declining sperm counts, and even cancer, including just two weeks ago, findings by the National Toxicology Program (NTP) which said that there is "some concern" for neural and behavioral effects in fetuses, infants, and children from bisphenol A (BPA). The announcement by the NTP has "inspired" the FDA to launch a new review of BPA, but qualified the development by telling consumers that they should not stop using products with BPA.

As news of Canada's announcement broke, Wal-Mart ceased selling polycarbonate bottles and the manufacturer of Nalgene water bottles. Nalgene said it would switch to alternative plastics in response to consumer demand, which might include the demand of one particular California based consumer who is suing the company for knowingly selling their product with the dangerous BPA substance. Canada's designation of BPA's as a toxic substance could be declared as early as October, but the ban will probably not take full effect for a year.

For now, for some of us at least, there is a whole new love affair with good old fashioned glass. Stay tuned...the BPA saga promises more twists and turns..just this week the dental industry stepped up an announced concern over BPA in sealants and dental fillings...yet another reason to brush before bed time.