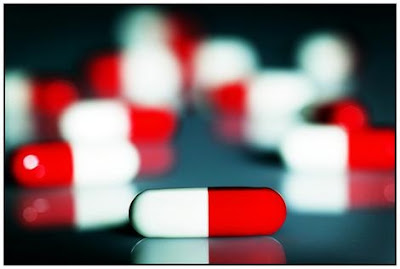 "Risk of Depression Dims Hopes For Anti-Addiction Pills" read the head line in AP yesterday. The medication of focus is Chantix and apparently works by blocking pleasure centers in the brain that provide the feel good response from eating or smoking. But now studies are finding that the drug is working all too well, and seems to be blocking pleasure from everything - causing severe depression and suicidal behavior in cases across the nation. Two other drugs recently have had similar problems.

Rimbonabant, an obesity pill sold in Europe was also linked to higher rates of depression in a study last month. Even though the evidence was clear, its maker Sanofi-Aventis SA is still pushing and remains optimistic that it will win approval in the U.S. Then there is Taranabant, a similar type of pill as Rimbonant and Chantix, which also became linked to high rates of depression just last month - its maker, Merck & Co decided to stop testing at middle and high doses to circumvent the findings. New drugs continue to hit the market claiming safety, with disclaimers for anyone with a "known history of depression."

Researchers are becoming disillusioned with the whole approach of these medications as a pleasure blocker as they can't differentiate between blocking the joy of one pleasure over another (removing the joy of a greasy burger or a cigarette will also remove the joys of a sunset or the smile of a child). But is this really a startling finding for researchers ? Are we suppose to believe that this aspect of the reaction of these medications was not taken into consideration before they hit the market ? To add insult to injury, the manufacturers of the medication are defending the medications putting blame elsewhere for the increased depressions and suicidal tendencies.Vice president, Dr. Ponni Subbiah, said nicotine withdrawal and even quitting smoking can cause mood swings and depression.

And Sanofi (the maker of obesity drug Rimonabant) now tells doctors to avoid giving the drug to people with a history of depression, said a company vice president, Dr. Douglas Greene. Another loophole the for a multi billion dollar industry to embrace. Mr. Green, not to sound too obvious, but why avoid those with diagnosed depression if there are no serious risks for complications ? And what specifically do you have to offer for the millions who have not been "officially diagnosed with depression" and take your medication ? And by the way, last question, are you offering free screenings by chance for all potential customers of your drug ?

The bigger issue here is that we are treating humans with conditions that are in most cases ultimately behavioral. There is no definitive data that shows overeating or smoking as a product of genetics. Yes, addiction runs in families, but the dysfunctional behavior that is rampant in families with addicts influences the next generation of addicts. Addiction is certainly inherited, but not necessarily genetically - as much as behaviorally. It is also shown that families with no college education produce kids who have less of a chance going to college, and women who have children as teenagers out of wedlock have a stronger likelihood of having children who will do the same. We inherit our predisposition to higher education, probably much in the same way as we inherit our predisposition to smoking, overeating or even drug use.

If we invested the same hundreds of millions of dollars into programs researching why we as a nation are eating, smoking and drugging our way out of our underlying issues, we might actually "cure" some of those problems instead of numbing and dumbing them down. Even if Chantix and the like didn't cause depression and suicide, it would still cause another equally dangerous condition...a new addiction - to those medications. All Chantix and other similar drugs are doing is playing musical chairs with addiction, and in the process pulling money being funneled into one pot into another (from millions spent by addicts on cigarettes, alcohol or illegal drugs - to legal drugs such as Chantix).

The pain, emptiness and chaos that plagues people who turn to any form of addictive behavior is the disease that needs the cure - not the "side effect addictive behavior. " Unfortunately no pill can cure a spiritual and/or emotional crises - this is the hard work of man/woman - it is the path they must walk. All that industry and government can offer in these scenarios is easy (and cheap/free) access to programs to help individual get on those paths, and stay on those paths. Until we stop buying into these quick fixes, we will continue to get cheap and dangerous manufactured promises from industries profiting from our suffering. Instead of numbing down - we need to start waking up and taking accountability for our conditions..regardless of how hard those pills might be to swallow.

(Based on findings in a story in Associated Press)