New Vaccine Targets 2.7 Million Kids, for a "Self Limited Condition" Dangerous to 20-60 Annually 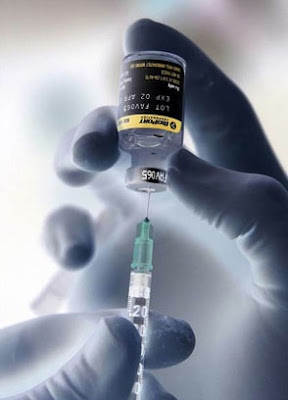 --science + technology + innovation--
A new vaccine has hit the market, this one called Rotarix which apparently immunizes children under 5 years of age from "Rotavirus, " a gastrointestinal condition.

Rotavirus effects 2.7 million children in the U.S.each year—about 55,000 to 70,000 of those require hospitalization (due to dehydration); and between 20 and 60 deaths are attributed to it. How is it that you might not have heard of it you ask - probably because it is so common that without vaccination, nearly every child in the United States would likely be infected at least once by age 5.

This vaccine, produced by GlaxoSmithKline goes head to head with competitor to Merck & Co Inc's rotavirus vaccine, RotaTeq (Merck's second-best selling vaccine last year with impressive revenue of $525 million). What's interesting here is that in 1999, a different rotavirus vaccine from another manufacturer was voluntarily withdrawn from the U.S. market because of an association with an increased risk of intussusception, or intestinal folding, which can lead to potentially life-threatening intestinal blockage. This release hopes to be a safer alternative, now that it has been approved and promises to do "further post market testing" (yikes!). So why the vaccine sequel ? Is Rotavirus the next small pox ? Is the Rotavirus something that us moms need to stay up at night worrying about, along side the bird virus, and environmental hazards ?

Well, according to every medical site we came to, we essentially got the same information, as the quote below from Medicenet.com

But are 20-60 deaths significant when compared to other common medical and social conditions causing child mortality? Should 2.7 million kids be vaccinated to avoid being one of 20-60 deaths ? Who are we really protecting here - our kids, or the shareholders at GlaxoSmithKline? And of course let's keep in mind that ....


I am just wondering here - but is another vaccine really where we need to be spending - considering that it takes an average cost of such a product is about $802 million - to properly test an get a new vaccine to market (according to a recent estimate by the highly respected Tufts University Center for the Study of Drug Development). Then let's not forget the hefty marketing costs thereafter. A figure particularly interesting to keep in mind when we consider that only $250 million is being spent on nutrition aid globally.

(Statistics taken from Child Protective Services, the CDC, and the FDA)

Rotavirus is pretty scary but I think we are over vaccinating our kids. I completely agree with you, if it takes care of itself in a few days why do we need to pump our baby with another immune suppressant. I am getting tired of the drug companies scare tactics. Enough is enough!

My niece spent the first year of her life in the hospital due to the rotavirus. It was a very emotional time for our whole family, I would encourage the vaccine. Although she recovered and is seemingly a healthy 10 year old the effects of the virus have caused many problems for her throughout her life, which in turn effects everyone who loves her.