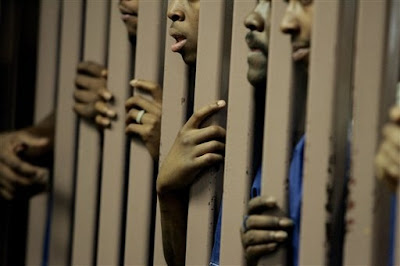 --trends + business + politics--
The United States has supposedly become the voice and symbol of racial justice and equality. The media is often quick to show our representatives either in, or running for, office, touting our upstanding record in democracy and human rights. But just last month the UN outright slammed the United States specifically on it record of racial equality and demanded that the U.S immediately adopt UN recommendation to alleviate widespread racial bias found in the American criminal justice system.

The UN's findings were based on consideration of extensive oral and written testimony submitted by the U.S government themselves to the UN Committee on the Elimination of Racial Discrimination ( a body of experts responsible for monitoring countries’ compliance with the Convention on the Elimination of all Forms of Racial Discrimination, a human rights treaty ratified by the United States in 1994). The information delivered to the U.N also, interestingly enough, came a bit late... to be exact FOUR years late (due in November 2003 but finally submitted by the US in April 2007).

“The UN is telling the US that it needs to deal with an ugly aspect of its criminal justice system,” said Alison Parker, deputy director of the US Program at Human Rights Watch. “The committee outright rejected the government’s claim that more black kids get life without parole sentences because they commit more crimes.”

The UN committee condemned what it found to be racial disparities in both the death penalty and in the sentencing of youth to life without parole for crimes committed when they were under 18. The committee criticized US practices in numerous other areas, including:


The Unites States has long held an attitude that many worldwide felt portrayed them as "above the law." The Guantanamo case was an example of the dynamic. The UN committe repeatedly dismissed claims by the US government that asserted that the UN did not have the power to examine the detention of non-citizens at Guantanamo. Regardless of the push back, the committee urged the US to guarantee judicial review of the lawfulness and conditions of the detainees. The recent criticism and demand for action by the UN will hopefully draw the attention of the media and the candidates running for office - as there is a stronger likelihood for change in our next administration than, based on the record, the current one.

We need to keep in mind when considering the racial climate of the day, that a record measured against those with a complete failure in equality and democracy (as often happens with public officials and some citizens, who begin to cite human rights travesties abroad) is no measure at all. We need to measure where we stand as a nation, one rooted in and priding itself upon democracy, based on the soul of the principles upon which we claim to have built this country. Let's not look to how much better we are than "them" - but rather measure where we stand as a nation in contrast to the dream of who we wanted to become.


(Based on a report by the Human Rights Watch)