Beyond Drowning Polar Bears:
Artists Reflect on the Complexity of the Ice Caps 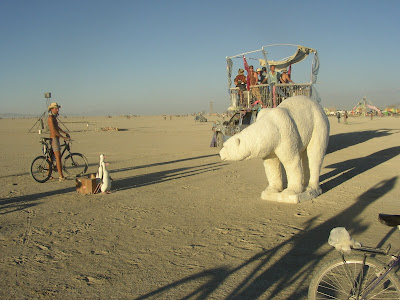 --Feature: "Inside the Green Museum"--

Since some truths were revealed as inconvenient, we've been inundated with images of cuddly drowning polar bears. The ultimate symbol for the casualties of climate change, polar bears have popped up everywhere, from youtube to burning man (as in photo above taken by at Burning Man). Dramatic as the changes in the polar ice caps may be, some of us may have stronger responses to cute, fuzzy and very endangered mammals.

Fortunately, several artists have taken a different approach and explored our ethereal connection to the frosty poles themselves. Using time-lapsed scientific documentary footage of the North Pole, artists Andrea Polli and Joe Gilmore reveal the character of a place where the sun rises but once a year and the earth's rotation is zero. We watch and listen to Gilmore's haunting music as the area around the pole is windswept, frozen, thawed and refrozen, over and over, at times seeming to grab hold of the camera, frosting it over or tilting it downward.

The video, called N., is on display at the Chicago Fields Museum as part of the exhibit Melting Ice- A Hot Topic. The exhibition has traveled from Norway and Belgium to Monaco, displaying the works of 23 artists and addressing this polarizing issue.

For artwork that physically occupies the space around the South Pole, check out Xavier Cortada's website, where he displays installations and works he created on Antarctica during the winter of 2006-07. Some of the many pieces include: a series of flags denoting endangered species and their home longitudes, a gathering of shoes from people affected by climate change, and a portrait of the first man to almost reach the South Pole. His work succeeds in culturally connecting Antarctica to the rest of the globe-- it becomes not a barren sheet of ice, but a continent where the invisible lines around the earth connect.

Artist Chris Drury has an excellent blog documenting the time he spent on Antarctica and the works he created as a result. Like Cortada, his work is varied, but uses mostly raw data complied by scientists from the continent combined with some of the thrilling and beautiful character of the ice. Just a quick skim of the blog will introduce you to some haunting images.

Finally, in a direct attempt to bring heaven to earth, Lita Albuquerque and a team of artists and scientists installed a massive series of blue spheres that corresponded with the placement of the stars in the winter solstice sky in 2006. It was called Stellar Axis. When the installation was done, 51 volunteers from the local base participated in a simple performance amongst the spheres that was filmed from a helicopter above. 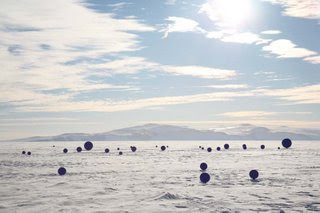 The work of these artists manages to give our frozen poles a character and connection. While not as cute and cuddly as polar bears, the coldest regions of the planet are just as much part of the global ecology, and just as deserving of our sighs.


"Inside the Green Museum" is written by Moe Beitiks who is the Blog Editor for greenmuseum.org. She is also a writer, gardener, artist and biofuel lackey living in Oakland, California.