Extinction as a Personal Problem 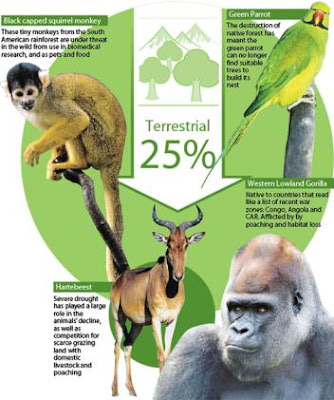 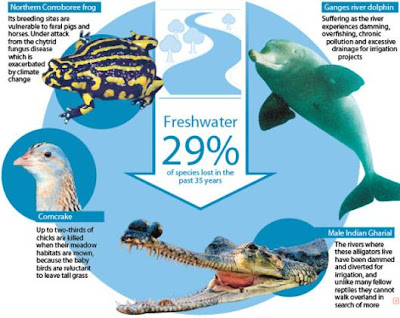 The Convention on Biological Diversity in Bonn brought together leaders to discuss how to make significant reductions in biodiversity loss. But in all truth - although policies need to be ironed out, the reality is that until the impact of biodiversity decline truly hits home, most individuals simply don't care enough to make an impact directly on this issue, or don't see the correlation of daily life to this issue. Endangered species for most, is as much of a personal problem as was terrorism to New Yorkers prior to 9/11; an important but distant cause. Until of course, one day the issue hits home, and hits hard.

Between 1960 and 2000 the human population of the world has doubled. At the same time, animal population declined by 30 percent. Scientists believe there is little argument to be made against a correlation between the two. In fact between 1970 and 2005, a study took place that tracked 4000 species. The effort was spearheaded by the WWF, the Zoological Society of London and the Global Footprint Network. The study isolated the five main reason for species decline - all of which can be tracked back to human behavior, including; climate change, pollution, the destruction of animals' natural habitat, the spread of invasive species, and the overexploitation of species. But is the information really new ? Isn't this just the regurgitating of the usual crimes against the planet we know we have committed. What we don't realize though is how much this actually impacts us, and exactly how rare this phenomena is.

Jonathan Loh, editor of the report, said that such a sharp fall was "completely unprecedented in terms of human history." "You'd have to go back to the extinction of the dinosaurs to see a decline as rapid as this," he added. "In terms of human lifespan we may be seeing things change relatively slowly, but in terms of the world's history this is very rapid." And "rapid" is putting it mildly. Scientists say the current extinction rate is now up to 10,000 times faster than what has historically been recorded as normal.

And for all the unprecedented change we also have unprecedented effects on us, the species on the other side of the chain; the lucky ones on the edge of explosive growth versus decline...but for how long? Scientists have made it clear that reduced bio diversity is simply dangerous to our species survival - it is the breaking of the subtle balance that holds nature together and preserves the homeostasis of life on earth.

" Reduced biodiversity means millions of people facing a future where food supplies are more vulnerable to pests and disease and where water is in irregular or short supply," said James Leape, director general of WWF.

In simplest terms, the growing epidemic of endangered species and loss of biodiversity is no less of an issue of another life forms potential extinction - as it is ours.

Here is an extraordinary speech on the impact of Bio-Diversity by renowned biologist E.O Wilson, courtesy of TED.