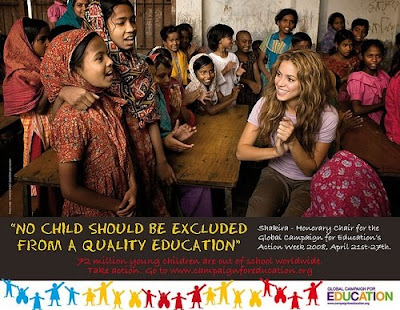 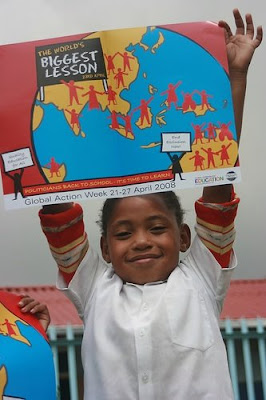 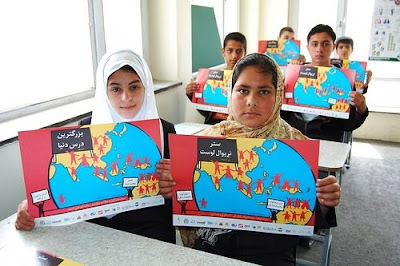 --celebrity + charity + global relief--
The Global Campaign for Education is currently collecting verification forms from around the world on what it believes to be the worlds largest campaign for education ever, literally breaking the world record for the largest simultaneous lesson in history.

The Global Campaign for Education and the "Worlds Biggest Lesson" has apparently reached some 7.5 million children, adults and teachers, joined by politicians in over 100 countries to learn about the importance of everyone having education. The country with the highest recorded count is Bangladesh, with 2.5 million people taking part in over 25,000 different locations across the country. Millions also took part in lesson in Vietnam and in an impressive campaigning effort a million took part in the lesson in the Palestinian Territories.

Celebrities, Heads of States, and Officials took part in the lesson across the world, with the highest profile being Colombian singer and Grammy award winner, Shakira. She sought international attention as Honorary Chair of Global Action Week, both on a media call with UK Prime Minister Gordon Brown and World Bank President Robert Zoellick, and as she lobbied Congress with students in Washington.

"I find it so inspiring that there are so many young people who care so deeply about the rights of all children to go to school that they would bring about this global movement," said Shakira.

"The most promising reason to believe that the world will achieve its goals of Education for All by 2015 has been the emergence of strong civil society movement and this mobilization of millions of children, women and men during the Global Action Weeks each year," noted Kailash Satyarthi, GCE President. "We will not fall silent until we have ensured quality education for all."

"One in four women in the world are illiterate. It's not right, and it's not just. The Global Campaign for Education (GCE) has been demanding an end to this injustice since 2000," noted Muleya Mwananyanda, GCE Action Week Coordinator. "By having legislators and government leaders join in the World's Biggest Lesson, we are challenging them to share with us what they are doing to ensure others get educated, and have the opportunities to be sitting where they're sitting now."

The World's Biggest Lesson was the highlight of the Global Campaign for Education's (GCE)'s Action Week which took place 21st – 27th April. Every year civil society across the world takes part in this week that pressures all governments to keep their promises and meet the Education for All goals, which were signed up to by 164 governments in Dakar in April 2000. With the phenomenal success of the World's Biggest Lesson, 2008 has seen the biggest Action Week since the beginning of the Global Campaign for Education in 1999.

More information about the GCE's activities and more highlights from the World's Biggest Lesson at: www.campaignforeducation.org