The Healthy Side of Sick:
Embracing Germs for the Health of It 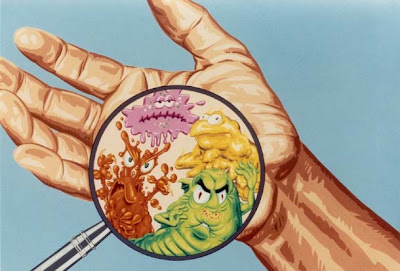 I may be behind the times here, but I just became aware that Band-Aid makes a bandage with an antibiotic ointment placed on the pad. While this may seem like an incredibly convenient solution for some mothers, I am dismayed at this decision, one made likely in response to the MRSA (methicillin-resistant Staphylococcus aureus) infection that have become very common in recent months.

As a mother, I am extremely sympathetic to the tragedies in which children died of complications of MRSA, and I am horrified at the thought of any child succumbing to such a virulent infection. However, I don't think that continued overuse of antibiotics will help the situation. 15 years ago when I lived in Denmark I had a conversation with my general practitioner, who was refusing my request for antibiotics for a sinus infection. "Americans are overusing antibiotics with grave consequences for the entire world," he told me in a very serious voice. And while I resented his refusal to give me the help I requested, his words stuck with me, and actually started me on my journey toward holistic health.

It can be argued that we've become obsessed with germs evidenced by the vast array of antibacterial soaps and hand sanitizers. When I'm concerned about catching some bug from a sneezing neighbor, I remind myself that getting sick occasionally is a natural part of being healthy, and that allowing our bodies to experience the natural cycles of sickness and recovery only strengthens the immune system. Have we made our bodies less resistant to infection by continually coming to the rescue with antibiotics? I have my opinion, but I don't know for sure. But I do know that we've made bad bacteria stronger by forcing them to adapt to stronger and stronger antibiotics.

I was at a recent social event at my church when my daughter cut her finger. Someone made sure to bring a bandage right away and mentioned that it is necessary to keep out any dangerous bacteria. I wondered if it were possible to keep out any bacteria with a simple bandage. I wasn't worried about a MRSA infection, but clearly my well-intentioned friend was.

I considered the "barrier" approach to infection, in which one believes that bacteria must be eliminated at every possible entry point, and the "terrain" approach to infection, in which one believes that one limits risks to infection by strengthening the body. So far, the latter has worked for us, and while I can't prove it works, I do know that it feels better psychologically to live with this belief. Rather than fearing the unseen, I accept that I have good and bad bacteria around and in me at all times, and it's part of my job to eat foods that keep the bacteria in balance. Accepting the good and making peace with the bad -- it's a philosophy that makes sense on a lot of levels.


Lisa Fyfe is a contributing columnist for The Lohasian. Her column, “Life with Fyfe: Confessions of a Holistic Mom” delivers a perspective on the everyday life of a modern holistic mom, as well as provides an insider look into best strategies for natural health and healing for the whole family.

Lisa is a Reiki Master, and an expert in Essential Oil Healing, and has spent the last several years extensively researching traditional diet and nutrition, with a focus on “whole,” locally grown and raised natural foods. She is a married mother of two children, Sophie and Max. Lisa approaches mothering as her highest calling, and believes that all mothers are natural healers and enjoys helping mothers (and others) help their children through the use of a variety of natural modalities.

To Reach Lisa, Email Here at lisafyfe (at) verizon.net