Is Technology Dumbing Us Down? 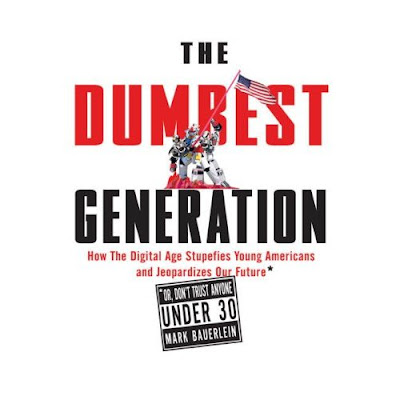 --film + television + print--
Is the simpler low tech life better for you ? Grandparents and natural living proponents certainly think so. But now a book has hit the news stands that might convince millions of others that high tech living has it's share of serious draw backs - including making you dumber.

The book is "The Dumbest Generation" and is written by Emory University professor of English, Mark Bauerlein. He asserts that cultural and technological forces have created such a high level of public ignorance that he believes it is an actual threat to democracy. Unlike many who believe technology opens up new means of learning - Bauerlein sees a digital world filled with useless distractions. He presents hefty data supporting his notion that kids using technology are immersing themselves in a trivial online world at the price of more enriching activities such a reading or even writing in complete sentences.

Amongst other stats he notes that the printed word had had a price - – from 1981 to 2003, the leisure reading of 15- to 17-year-olds fell to seven minutes a day from 18. But a bigger culprit perhaps is the scale of multitasking that has taken over. By 2003, children were cramming an average of 8½ hours of media consumption a day into just 6½ hours – watching TV while surfing the Web, reading while while listening to music, composing text messages while watching a movie. Is all this attention splicing good for kids? According to the National Assessment of Education Progress - not so much.

According to the NAE 46% of 12th-graders below the "basic" level of proficiency in science, while only 2% are qualified as "advanced." Likewise in the political arena: Participatory Web sites may give young people a "voice," but their command of the facts is shaky. Forty-six percent of high-school seniors say it's " 'very important' to be an active and informed citizen," but only 26% are rated as proficient in civics. Between 1992 and 2005, the NAEP reported, 12th-grade reading skills dropped dramatically. (As for writing, Naomi Baron, in her recent book, "Always On: Language in an Online and Mobile World," cites the NAEP to note that "only 24% of twelfth-graders are 'capable of composing organized, coherent prose in clear language with correct spelling and grammar.' ") Conversation is affected, too. Mr. Bauerlein sums up part of the problem: "The verbal values of adulthood and adolescence clash, and to enter adult conditions, individuals must leave the verbal mores of high school behind. The screen blocks the ascent."

Although Bauer makes a captivating, if not fairly common, argument we need to ask ourselves if perhaps its not so much technology as a phenomena or its various platforms that are the issue - but rather the extent of use and what it is replacing. Television, radio and yes even books can provide an unhealthy escape for kids and adults seeking an alternative to engaging with the world. Kids locked in their rooms for 7 hours at a time on a video game are no less or more socially adept then kids locked in their room reading for 7 hrs. One just holds more intellectual weight - but does it make for a more well adjusted kid? Behaviorally its the same can of worms. The issue with technology has more to do with the fact that we have given free reign of it to our children. Texting, Internet, and even many forms of video games are harmless - unless of course they begin to substitute real life interaction and connection to the world. The technology gorge is more to blame - then technology itself.

We often look for scapegoats on why we are getting sicker, dumber, or unhappier - technology just being one. Like in all things - balance and moderation is the key.

As a homeschooling parent, this leaves me flat. If Bauerlein doesn't also look at the way that modern education kills a child's creativity and natural curiosity, then he's missing a big part of the equation.

I think most kids are bored with school. Technology becomes a time-filler as a result. It's an effect, not a cause.